You are in:
Home/ In the news/ Young boy reunited with life savers following cardiac arrest 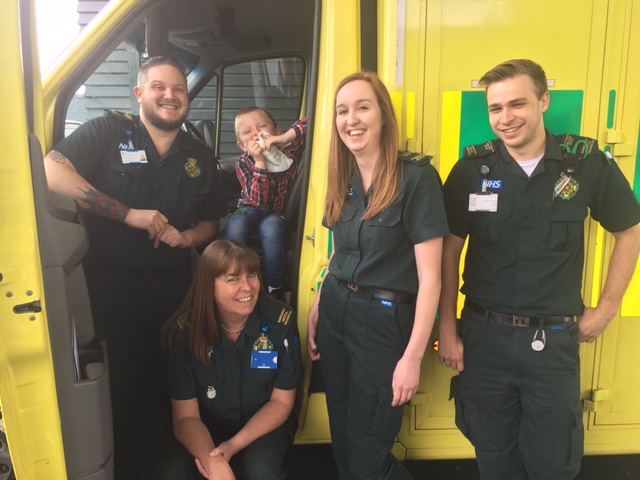 The thought of a five year old child in cardiac arrest is a terrifying prospect for anyone, but for Sara Hustwayte this was the reality she faced with her son in December.

Alfie Hustwayte, of Lucas Avenue in Chelmsford, was at home with his family on 29th December when his health plummeted.

Sara said: “Alfie seemed really drowsy and was just not being himself so immediately I thought something wasn’t right.”

He was lapsing in and out of consciousness so Sara dialled 999. Immediately one of our ambulance crews was sent to Alfie’s aid in the form of Emergency Medical Technician Debbie Quirk and Student Paramedic Elliot Jones.

They arrived within eight minutes of the call but unfortunately Alfie had stopped breathing completely.

Elliot said: “It all seemed to happen very quickly but when Debbie and I arrived we just went in to autopilot, putting in to action everything we had learnt.”

The team decided that immediate hospital care was the best option and took Alfie to Broomfield Hospital before he was transferred to St Mary’s Hospital in London.

He has since gone on to make a good recovery and last week (Saturday, 22nd April) was reunited with his life savers under much happier circumstances at Chelmsford ambulance station.

Sara said: “It means a lot to me to be able to thank them all in person, I couldn’t have asked for a better level of service and care. The affection we were all shown on that day and the weeks after meant the world to me.”

Debbie said: “Alfie’s story is a great example of everyone’s effective teamwork and in his case it saved his life.”

The East of England Ambulance Service NHS Trust (EEAST) will be posting stories from patients and patient teams throughout the week which you can find on Twitter and Instagram @EastEnglandAmb, on Facebook, and online www.eastamb.nhs.uk using #patienttakeover.