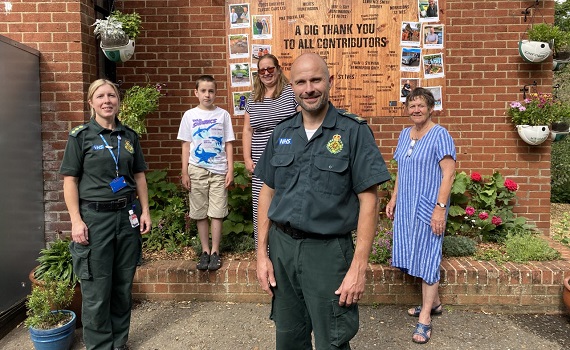 A ‘wellbeing garden’ where ambulance workers can enjoy much-needed downtime between callouts has been unveiled after a community push from the people of Huntingdonshire.

The area at the back of Huntingdon Ambulance Station has been transformed from a neglected space into a tranquil garden for East of England Ambulance Service staff thanks to the generosity of local companies and individuals.

Among those who contributed and was present to see the opening of the garden was Beth Langley and her son, Alfie, nine, from St Neots, who raised money for the project through a cake sale.

Beth said: “Alfie wanted to do something to help the NHS and came up with the idea of a cake sale.

“We donated the money to the wellbeing garden after hearing about it through a friend. It’s great for Alfie to see the finished garden and hear about the positive impact it is going to have for NHS workers.”

The wellbeing garden has long been in the planning and was pushed forward because of the coronavirus pandemic.

Steve Wootley, an emergency medical technician at the station, was a driving force behind the project, putting hours into the garden and helping with fundraising, but was quick to acknowledge the contribution of Jeremy Mildenhall, from Cambourne, who kickstarted the project while furloughed from his job by clearing the garden and also raised money for shrubs.

“The pandemic was a real spur for us to crack on with the project and I have been overwhelmed by the generosity of local businesses and the community,” said Steve.

Lesley Hall, an operations manager at the station, added: “Having this tranquil environment for staff to relax between shifts is going to make a huge difference to morale and I want to thank everyone who has helped this project come to fruition.”

The garden includes ample seating for the staff who work out of the station while the walls are decorated with graffiti by a local artist Jonnie Barton.

The vast array of the plants in the garden were supplied by Fran Williams, who was also present at the opening and thanked the contribution of the villagers of Hemingford Abbots and Hemingford Grey.

Fran said: “I wanted to help NHS workers, and this wellbeing garden seemed like a fantastic idea.

“I have a background in the NHS and without the dedication of NHS workers during the pandemic, we would be in a very different position. I would do anything to help them.”

All the people and business who contributed to the garden are recognised on a sign that is mounted on a wall as you enter the garden.