You are in:
Home/ In the news/ Volunteer wins lifesaver award 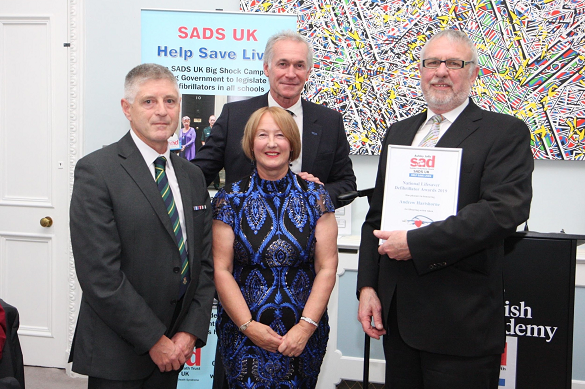 A community first responder was presented with an award by TV host Dr Hilary Jones after saving a woman’s life.

Mr Hartshorne, who volunteers in the Aylsham area, had been out shopping in Market Place with his wife when he noticed three people gathered around a woman, who was lying on the floor unresponsive.

The three people all offered to help and, under his guidance, rotated between performing chest compressions and mouth to mouth.

As soon as a public access defibrillator arrived, Mr Hartshorne shocked the patient four times before she began breathing on her own again.

Janet Green, 69, was taken to Norfolk and Norwich Hospital where she was fitted with a pacemaker and has since made a full recovery.

Mr Hartshorne said: “I was very pleased to be recognised, volunteers are not as high profile as some frontline staff.

“I have been with EEAST since 2013 and I’m proud to be a volunteer. Often, we reach patients in a life-threatening emergency before an ambulance crew arrives so the work we do is really important.

“Our first responder group has wonderful support from the public and we have been very busy teaching CPR to schools, mother and toddler groups and other organisations. Interest in saving lives in the area has really increased since this event took place.”

The presentation was held 16 November at the British Academy of Contemporary Artists in London, at the annual dinner and awards ceremony of SADS UK.