You are in:
Home/ In the news/ Two new seafront defibrillators installed at Suffolk town 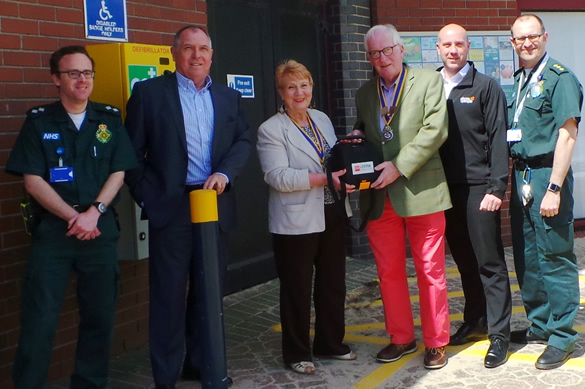 A community has been praised for recognising the importance of defibrillators after installing two new life-saving devices.

The new seafront additions were made possible, thanks to the generosity of the Rotary Club of Felixstowe and Felixstowe Town Council.

The devices, which have been installed in case someone collapses and is in cardiac arrest, have been placed outside the leisure centre and beside the car park in Beach Station Road. It comes after one was installed by the council at Felixstowe Library in February.

The early use of a defibrillator and effective cardiopulmonary resuscitation (CPR) can make the vital difference in the critical first minutes before a community first responder or ambulance crew arrives to a patient who unconscious and not breathing.

Jan Garfield, Felixstowe Mayor, said: “Thanks to Rotary Club of Felixstowe, the Town Council and our partners in the community - such as the library and leisure centre - Felixstowe is particularly well catered for with public access defibrillators; any of which could one day be used to save someone’s life.”

Access to the defibrillators, which are locked in cabinets, is via a key code held by the East of England Ambulance Service NHS Trust (EEAST) and is given out when someone calls 999 about a cardiac arrest.

Jon Needle, EEAST Community Collaboration Manager for Suffolk, said: “I’d like to congratulate the community of Felixstowe on making this investment. The first few minutes of a cardiac arrest are vital and early defibrillation is key. More defibrillators in our communities will potentially save more lives.”