You are in:
Home/ In the news/ “Two hours later and I would have died”: Cambridgeshire woman praises lifesaving medics

“Two hours later and I would have died”: Cambridgeshire woman praises lifesaving medics 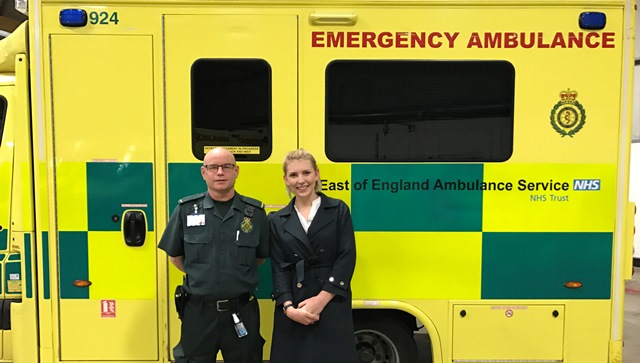 Collapsing at an airport before a trip might seem like an awful scenario, but for Hollie Jackson if she had got on her flight in January she may have never made it home.

Hollie, 22, of Lilyholt Road in Benwick collapsed at Stansted Airport on the 4th January moments before stepping onto a plane for a work trip. She said: “I had a pain in my leg and my head was a little sensitive to light but I thought nothing of it.”

Medics at the airport assessed her and recommend that she visit her local hospital accident and emergency department immediately. Hollie was tested at Peterborough City Hospital before being cleared as her results came back inconclusive.

Sadly, her condition deteriorated rapidly at home, with her left side going completely numb. She was vomiting, and developed a rash all over her body.

Hollie said: “By 4am my vision started to go and the pain in my head was unbearable, it felt like a kettle was being brought to the boil in my skull.”

Her mum Wendy called 111 and an ambulance was quickly sent to help which arrived in the form of Senior Paramedic Greg Sage and Emergency Medical Technician Matt Bafico.

When they arrived they knew immediately something wasn’t right. Greg said: “It was evident that Hollie was extremely sick; she ticked all the boxes for meningitis.”

Greg intravenously administered penicillin which doctors later said gave Hollie the crucial time she needed to get to hospital alive. She remained at Peterborough City Hospital for eight days in intensive care with bacterial meningitis before being sent home.

And this week (Thursday, 27th April) Hollie was able to thank Greg in person at Peterborough ambulance station. She said: “It was lovely to meet Greg under much happier circumstances and thank him; the doctors said that if I had left it two hours later I would have died, which took a few weeks to sink in. It is clear to see that the choices both he and Matt made on that day saved my life.”

Greg said: “It is wonderful to see her looking so well, and to find out that we played a major part in saving Hollie’s life means so much to us.”

Hollie has since gone on to make a good recovery and recently raised almost £1,500 in a charity sky dive for the Meningitis Now charity. You can still donate by visiting https://www.everyclick.com/hollyjackson4meningitis

For more information about the charity and other information on meningitis please visit https://www.meningitisnow.org/