You are in:
Home/ In the news/ “Thankyou isn’t enough”: Essex man praises lifesaving medics 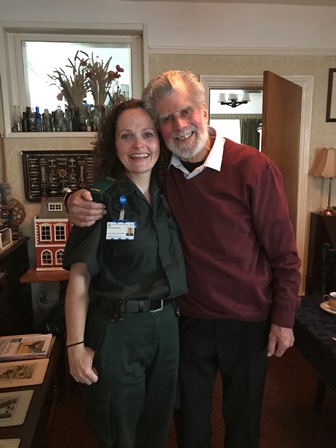 A man who defied all the odds after a cardiac arrest in November last year has had the chance to thank one of his ‘guardian angels’ in an emotional reunion.

David Walkden, 81, was watching the Formula 1 Grand Prix at home in Thorpe Le Soken on 27th November when he developed severe chest pains. His wife dialled 999 can help quickly arrived in the form of Paramedic Sheena Bumphrey and Emergency Care Assistant Jason Purvis.

“I cannulated him quickly because I felt like he could go into cardiac arrest at any stage whilst Jason helped grab equipment from our ambulance.”

Unfortunately David’s condition deteriorated rapidly whilst in the ambulance en route to Basildon Hospital’s PPCI (Primary Pre-cutaneous Coronary Intervention) unit. Sheena said: “We were having a normal conversation when he suddenly went into cardiac arrest; it threw me completely.”

Sheena and Jason were forced into action, pulling roadside to begin advanced life support. David was shocked 15 times before he was resuscitated, stabilised, and taken to hospital, having been in cardiac arrest for 15 minutes. They were then supported by Paramedic Lou Wheatley, Emergency Care Assistant Victoria Everett and Duty Locality Officer Steven Keating.

Sheena said had not been able to stop thinking about that day, adding: “This will be a job that will live with me forever; I honestly thought he wouldn’t survive. But to see him now is a testament to his strength and the excellent team effort of all involved on that day.”

David, who has now been fitted with two stents, said: “Thankyou isn’t enough; I feel humbled by what they did. Without them, I wouldn’t be standing here now.”

Christine said: “The medics were so swift and super; it feels like I’m living a fairy-tale story to have my husband back.”

He is keeping fit and active, controlling his diet and enjoying more time with his four children and three grandchildren who are devoted to the couple. However, he jokes: “I was considering walking the coast to coast route in the north of England, but thought better of it and think I’ll stick to reading books about it!”