Thank you event for patient’s family 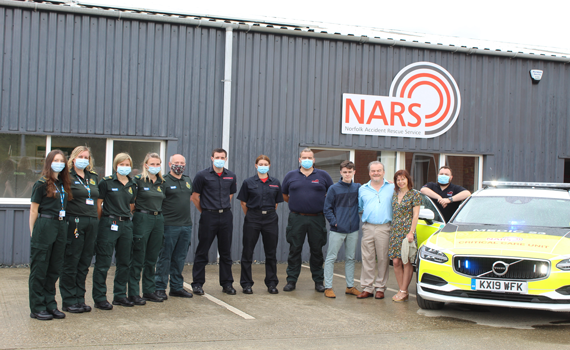 Recently, a team of EEAST colleagues got the chance to thank a 15-year-old lifesaver who stepped in to perform CPR when his dad went into cardiac arrest.

The team, which included members of EEAST staff and volunteers from Norfolk Accident Rescue Service (NARS) met up with the family at the NARS base in Dereham which gave everyone the opportunity to say thank you.

The patient, Tim Wood, was at home in Mulbarton when he collapsed back in January this year. His son, Charlie, found his dad on the floor slipping in and out of consciousness and, believing he was having a seizure, called 999.

During the call Tim went on to suffer a cardiac arrest and Charlie began CPR, something he learned six years previously at an after-school club.

‘Charlie did a brilliant job. I was able to go into the house, take over compressions and use our defibrillator until the ambulance crew arrived, at which point I took both Charlie and his mum outside the house. It’s amazing to think that Charlie was able to put his first aid skills to good use, despite being taught them back in primary school. It just goes to show how important it is that everyone has a basic understanding of first aid, whatever your age. I have no doubt that Charlie’s quick response played a huge part in saving his dad’s life.’

When a patient suffers a cardiac arrest outside of a hospital setting, the first minutes make all the difference. For every minute they are left untreated their chances of survival reduce by 7-10%.

On Sunday, Tim and his family met with Steve Maddams and EEAST staff Lolo Moore, Martin Dixon, Laura Sercombe, Alanah Patterson and Sue Smithson who supported his care, both over the phone and on the ground. Alex Hartley, Critical Care Paramedic with NARS, and colleagues from Norfolk Fire & Rescue service also attended.

Tim’s wife, Rachel, said, ‘Tim doesn’t remember anything from that day so to be able to meet the people who worked together to care for him was a lovely experience. It was also very strange as, at the time, although Charlie and I saw and spoke to them they were all in full protective equipment, so it was nice for us to be able to meet them all properly and say thank you.’