You are in:
Home/ In the news/ Suffolk man's thanks to staff after heart is restarted 11 times

Suffolk man's thanks to staff after heart is restarted 11 times 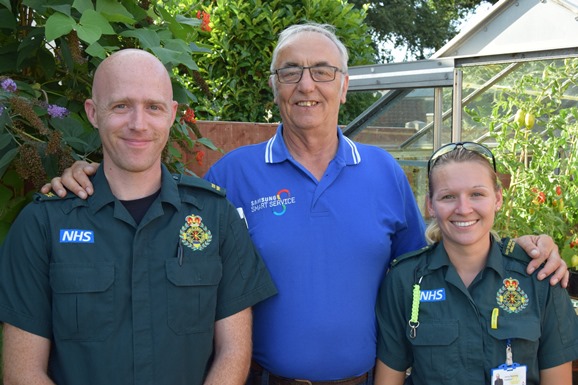 A Suffolk man has spoken about the importance of acting quickly when someone suffers chest pain after his heart was restarted 11 times.

Steve Clarke called 999 after suffering “crushing” chest pain and managed to unlock his front door before collapsing and going into cardiac arrest.

The 60-year-old from Normanston, Lowestoft, this week (24th August) thanked two of the East of England Ambulance Service NHS Trust (EEAST) staff who rushed to his aid.

The grandfather-of-four collapsed in his kitchen as Paramedic Andrew Ormiston and Student Paramedic Thomas Lewis-McDonald pulled up outside his home in an ambulance.

Paramedic Jenny Stocking, who also attended, said: “Steve was so close to death, but he kept fighting. It is amazing to see him so well now.”

He was resuscitated eight times at home and en route to the Norfolk and Norwich University Hospital, and arrested a further three times whilst being prepared for surgery in the early hours of 7th March, 2015.

Steve, a refrigerator engineer, was off work for three months after his heart attack. His message to the public is to call 999 immediately if they are experiencing chest pain.

“It started off as pain in my shoulder blade and went to my chest. It felt like someone was pushing down on my chest. I thought I could sleep it off, but when my heart started pounding, I called 999. The important thing is that if you are having chest pain do not hang about.

“I can remember unlocking the door and I remember it going dark and it felt like I was falling off a cliff. I remember coming out of theatre later that night and feeling great,” he said.

He was in hospital for four days after having stents and a balloon inserted to repair a blocked artery.

Steve added: “I cannot thank you enough. Everything I do now is down to the ambulance and hospital staff. Life is so fragile and we take it for granted.”