You are in:
Home/ In the news/ Suffolk man's thanks to ambulance 'heroes'

Suffolk man's thanks to ambulance 'heroes' 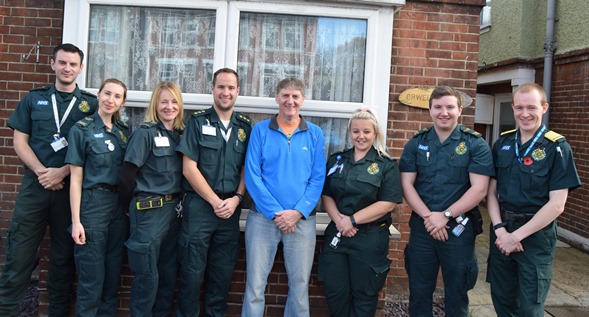 Neil Ayers can not remember the day he collapsed or anything about a two week window of his life.

The 53-year-old's heart was shocked seven times after he went into cardiac arrest at his  home on 24th August in Ipswich, Suffolk.

The crane driver, who returned to work this week, said: “I can not thank them enough for what they did for me. They are brilliant.

“It is great to see the people who saved me. It was another job for them, but it was a lot bigger for me. Each and every one of them was fantastic.”

His wife Carol called 999 just after 10.30pm after he collapsed and within four minutes Kim and Jacob were on scene.

They began advanced life support and James arrived with a Lucas 2 – an automatic chest compression device. After seven shocks from a defibrillator, the team managed to resuscitate Neil. Meanwhile, Suffolk Fire and Rescue Service fire officers had removed a window to stretcher him out of his home from his first floor bedroom.

Neil was rushed to Ipswich Hospital and after a fortnight was transferred to Papworth Hospital where he had an implantable cardioverter defibrillator (ICD) implanted in his chest.

He added: “The physical recovery has been really good, but the emotional side not so good because I keep imagining what my family went through. I am a better person for it. I was a miserable person before and now I’m a lot calmer and do not get wound up about things.”

James added: “This is what we do the job for. He had everything going for him on the night and we will be buzzing for a long time after this.”