You are in:
Home/ In the news/ Suffolk man thanks his 'guardian angels'

Suffolk man thanks his 'guardian angels' 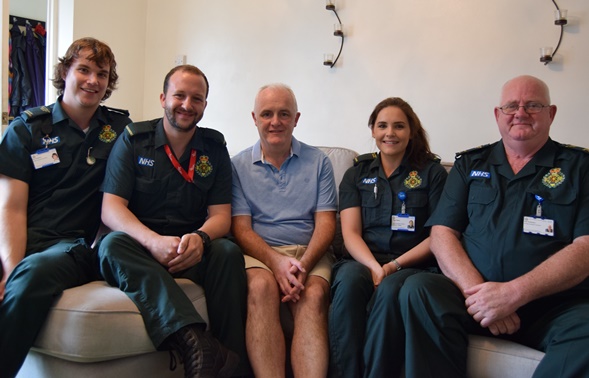 A Suffolk man has been reunited with his “guardian angels” after his heart stopped just weeks ago.

Paul Thornton collapsed at his Bury St Edmunds home on 12th June after walking his dog, and went into cardiac arrest.

However, thanks to the swift actions of partner Roz, who immediately started cardiopulmonary resuscitation (CPR), and the quick arrival of ambulance staff, they restarted his heart.

And last week, the 49-year-old crane operator said thank you to the four East of England Ambulance Service NHS Trust (EEAST) staff who helped save his life, saying: ““Words cannot express what they mean to me – they are my guardian angels. If it was not for them and Roz, I would not be here today.”

Within two minutes of the 999 call, Luke Chamberlain and  Page Wilson were on scene followed by Alan Robertson and Benjamin Southam in another ambulance and the Essex Air Ambulance.

Following CPR and four defibrillator shocks, they resuscitated Paul who was sitting up in the ambulance by the time they left for Papworth Hospital to repair a blocked artery with a stent.

He was discharged from hospital three days later with a couple of broken ribs.

Paul said: “It is the best pain I have ever had. The fact I’m here to feel pain is an absolute blessing. All I can remember is the ambulance doors closing and then being in the hospital.

“The consultants and the nurses were brilliant, but it is the ambulance staff who deserve all the thanks because the hospital staff would not have a job if it wasn’t for them.”

Luke, an education and training officer for the Trust, said: “It was the perfect chain of survival. Paul’s heart was not working, but Roz was doing such effective CPR and getting oxygen to his brain that he was fighting us off whilst we were treating him. I have never seen that before.”

The Trust is getting involved in Restart a Heart Day to teach schoolchildren CPR on 18th October. Schools wishing to get involved are being urged to contact Community Collaboration Manager Wendy Risdale-Barrs by emailing wendy-jean.risdale@eastamb.nhs.uk