You are in:
Home/ In the news/ Suffolk man reunited with life savers after cardiac arrest in leisure centre 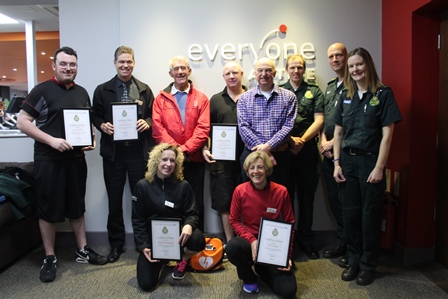 One minute you're using the treadmill at the the gym. Three weeks later you're meeting the people who helped save your life. Thankfully not a common chain of events, but one which for Suffolk patient Alan Hartley was all too real when he suffered a heart attack at Everyone Active Leisure Centre in Stowmarket last month. Thankfully, the efforts of the gym staff combined with our expertise from the ambulance teams meant Alan is alive today.

Avid gym goer Alan, 68, of Elmswell was on a treadmill when he collapsed, suffering a massive heart attack and going into cardiac arrest on 23rd January.

Becky Cruikshank from Everyone Active was the first to respond: “I saw Alan on the floor and knew something wasn’t right. I shouted for help immediately and pushed our panic button. Moments later it was apparent Alan wasn’t breathing and I began chest compressions.”

Her colleague Steve Ward retrieved the gym’s defibrillator and following the instructions, administered the first and most vital shock.

He said: “You just go into auto pilot in those situations; I just saw someone who was very sick and needed our help.”

Alan was shocked three times, resuscitated and then flown to Norfolk and Norwich University Hospital where he remained for just three days before being discharged. He later learnt that he had suffered a total blockage of his anterior lateral artery.

This week (Monday, 13th February) he was reunited with his life savers under much happier circumstances.

Speaking at the meet-up, Alan said: It’s been great to see everyone, they saved my life. I know these guys don’t do this job for the credit but they really deserve it in my case.”

He added: “The gym staff don’t go to work and expect to save a life and for that I owe them so much; it’s amazing to be able to thank them in person.”

James credited everyone involved and said: “It was a fantastic effort. The quick recognition of the severity of the incident by the gym staff as well as early cardio pulmonary resuscitation (CPR) and use of their defibrillator ensured Alan had the best chance of survival.

He added: “I would also like to thank the call handler and dispatcher involved; they deserve credit for delivering excellent instructions over the phone as well as dispatching the appropriate resources Alan needed. Everyone did their part to give Alan his life back to him.”

For more information on how defibrillators work watch this short video: https://www.youtube.com/watch?v=KB3IA1y36cU