You are in:
Home/ In the news/ Suffolk family's emotional reunion with lifesavers 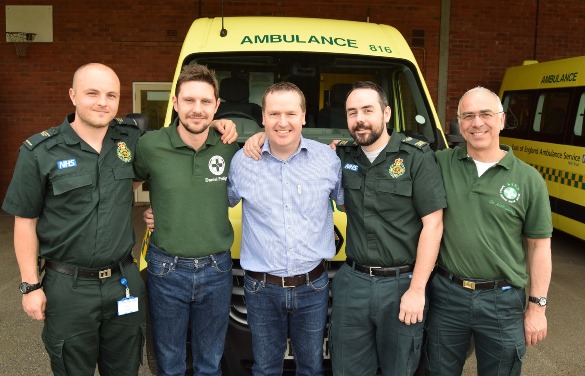 Andrew Wilding cannot remember going to a church concert with his family, getting a takeaway, driving home and going to bed feeling tired.

But he will forever be grateful to the East of England Ambulance Service NHS Trust (EEAST) staff and Suffolk Accident Rescue Service (SARS) clinicians who rushed to his aid when he went into cardiac arrest on 20th November.

The 49-year-old from Stowmarket, who had a heart transplant seven years ago as a result of a rare disease, had an emotional reunion with his lifesavers on Saturday (22nd April) where he thanked the people who resuscitated him.

“It is difficult to put into words, but I would not be here today if it wasn’t for these guys. It is overwhelming and it is nice to have the opportunity to meet them. I want to give something back,” he said.

Andrew has pledged to raise funds for SARS – the emergency medical charity whose volunteer doctors and paramedics provide critical care at serious incidents.

The teams also praised Nicola Wilding for performing cardiopulmonary resuscitation (CPR) on her husband. She has had no first aid training, but was guided by the EEAST Call Handler Shane Moulds to do “spot on” chest compressions before the arrival of Paramedic Harry Fisk six minutes after the 999 call. Andrew was resuscitated with one shock from a defibrillator.

Dan, who is also an area clinical lead for EEAST, said: “The main thing that made the difference was what Nicola did. Immediate CPR is the most important when someone is in cardiac arrest.”

Andrew was taken to West Suffolk Hospital and transferred to Papworth Hospital where an implantable cardioverter defibrillator (ICD) was fitted in his chest.

His son Harry, 19, who plays tuba for the East of England Co-op Band, has already raised more than £3,600 for SARS from a concert and daughter Lucy, 15, has organised an non-uniform day at Stowmarket High School.  A calendar of Suffolk landscape photographs put together by Andrew is also raising money for the charity.

For more information on the work of SARS, visit http://www.sars999.org.uk/