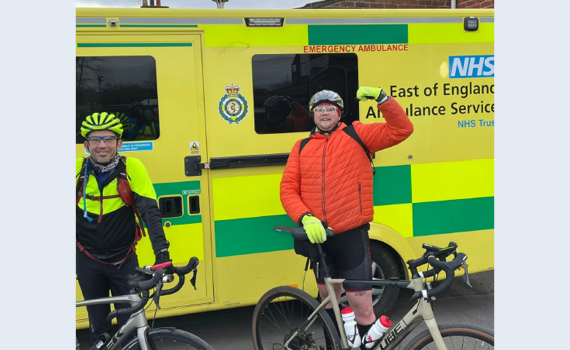 Twenty-nine-year-old Ashley McLean has raised £3250 for EEAST after cycling 100 miles in 24 hours, exactly one year after suffering a stroke at home in bed.

On 17th February 2021, Ashley had dropped his partner at work and was at home in bed typing a message to her on his phone when he realised he couldn’t make out her name or type the words.

Ashley, from Bedford, said: ‘I called 999 but getting my symptoms and address out seemed like an impossible task as it was getting harder by the second to even say single words. Luckily, with the calm and patient voice of the operator I was able to explain what was happening. She identified that I was having a stroke, asked me to check that the door was unlocked and reassured me that help was on the way.

‘When the paramedics arrived, they were so calm and friendly that I felt much safer. They made a rapid assessment, confirmed I was having a stroke, and explained that I needed to get to hospital immediately. In the back of the ambulance, the crew worked with me, helping go through my phone to identify my partner and dad and contact them to explain the situation.

‘I was terrified that life would never be the same again, but the crew were so kind. They reassured me that I was in safe hands, reminded me that these things happen every day and that I was not alone. Their understanding of how scared I felt at my world being turned upside down in a matter of seconds was invaluable and for that support I’m eternally grateful.

‘Test results confirmed that I had suffered a Frontal Lobe Infarct, I was very lucky as it only seemed to affect my speech and language, but I still suffered extreme clinical fatigue.

‘I started my recovery by walking round my estate and was able to build up enough strength to walk a mile. When summer arrived, I discovered cycling through my father-in-law, Mark Woodworth (Woody), and fell in love with it. I joined a road cycling club, BRCC in Bedford and started group riding, gradually increasing the distances from 10 miles up to 50 miles a day. I came up with the idea of riding 100 miles on the anniversary of my stroke, to raise money and awareness for the incredible service that EEAST provides, and personally, to give back to the crew who helped me as I didn’t get to say thank you.

‘I had five weeks of solid training, and It looked like I was doing to smash my goal. Unfortunately, I then got COVID 19, but was able to recover and although still a little under the weather decided to go for it. On 17th February 2022, I set off with Woody at 7am, with an average temperature of 0-2 degrees, and we completed the 100 miles in 9.5hrs, raising over £3250 for EEAST.

‘Those 100 miles were the biggest and hardest physical challenge I’ve ever faced, but they represent a whole year of hard work and dedication to get back to the life I love. I wanted to prove to myself that when I put my mind to something I can achieve it and what better way to give back to the people who saved me. I always hear about the rest of the hard-working NHS teams, but less so about the highly skilled first responders that come to us in our hour of need wherever we may be, come hell or high water. I’ll never forget that when I called, they were there for me.’

The East of England Ambulance Service NHS Trust Charitable Funds operates for the benefit of patients, staff and the health of the local population, in support of the Trust’s values and strategic goals. It provides enhanced equipment, training and wellbeing support to staff and volunteers, beyond that which is ordinarily afforded by the NHS.

Find out more about the East of England Ambulance Service NHS trust Charity on the EEAST website.