You are in:
Home/ In the news/ Service takes part in Norfolk road safety campaign launch 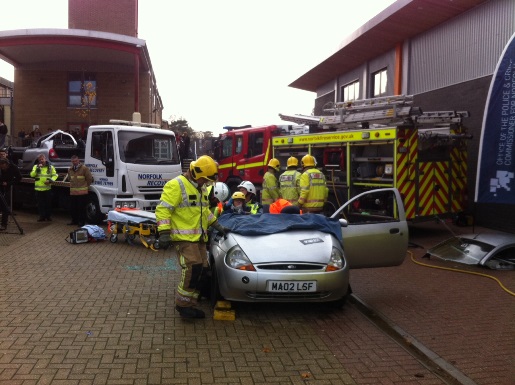 Two hundred students have received a valuable lesson in road safety at the launch of a new campaign.

Staff from the East of England Ambulance Service NHS Trust (EEAST), firefighters and police officers joined forces yesterday at City College Norwich to give a demonstration of how the emergency services respond to a road traffic collision.

Former patient Thomas Semmons, 18, who was seriously injured in a road traffic collision in Norfolk, also spoke of his personal experiences as part of the campaign to improve road safety amongst young people.

The #Impact campaign was launched by Norfolk’s Police and Crime Commissioner and supported by the Trust, Norfolk Fire and Rescue Service and Norfolk Police.

Thomas, who suffered a punctured lung and fractured shoulder and cheekbone on 16th July, was reunited with Duty Locality Officer Gary Steward who treated him after his collision.

Thomas said: “The emergency services were brilliant that night. I was panicked because I did not like seeing my first car being cut up. They kept me calm and looked after me so much even though I was being difficult refusing needles. They cared for me so well and I owe my life to them.”

He added this message for young drivers: “When I had my accident, I was not speeding, but I was going too fast for the conditions. I was wearing a seatbelt, which probably saved by life, and I was not under the influence of drugs or alcohol, so was able to react quickly, and I was not on my mobile phone.

“My message is that you are not as good as you imagine you are. You are inexperienced drivers and have many driving years ahead. There is no need to take risks and it is better to get there late than not at all.”