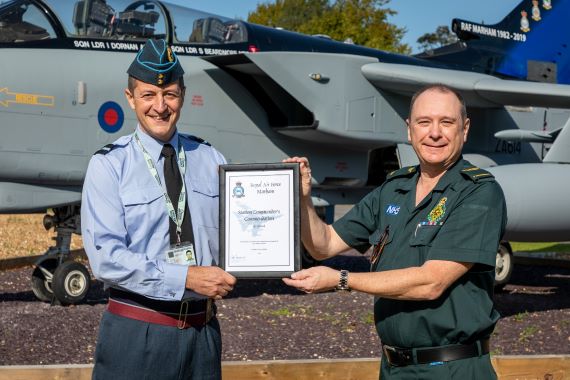 EEAST Paramedic, Paul Chittock, has been awarded a Station Commander’s Commendation, marking 15 years of voluntary support for RAF colleagues based at Marham air force base in Norfolk.

Paul’s volunteering has seen him working on everything from events and first aid training to critical incident scenarios, this is all alongside his day job with EEAST as a Paramedic, based at Kings Lynn.

Over the years Paul has provided medical cover and education for Family and Friends Days at the base, regularly facilitates the use of fully equipped ambulances and is passionate about passing on life-saving skills for Marham staff who frequently come across road traffic incidents on Norfolk’s roads. He also encourages colleagues from EEAST to offer their support as well.

In addition, Paul is actively involved with the Co-Response Team, who offer support at major incidents, spending hundreds of hours mentoring and developing them, with members benefitting from his training and experience as a paramedic.

In 2015, Paul oversaw the training of 30+ RAF personnel in a large and complex road collision scene management exercise. His expertise ensured that the Fire Section, Medical Centre and Co-Response Team were fully prepared for challenging winter conditions going forward.

‘Mr Chittock is the linchpin of the team, keeping the Station highly trained in first aid response, and his support to Station major events has been first class. At no cost to the Station, advanced life-saving medical care has always been seconds away. What a great friend and ally for the Station to have, and what a fantastic contribution he has made over many years.’