You are in:
Home/ In the news/ Queen's Award joy for volunteer life-savers 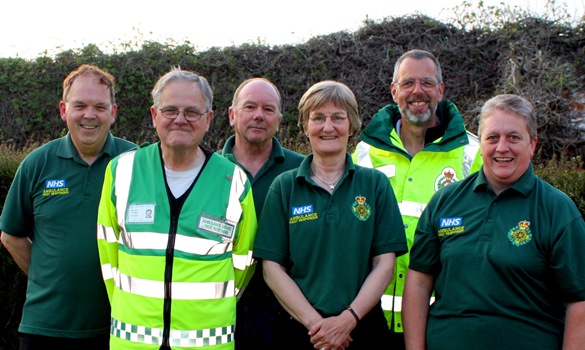 A group of life-savers in Norfolk are celebrating after being honoured with the highest award that volunteers can receive.

Stalham Community First Responders (CFR) will be formally presented with the Queen’s Award for Voluntary Service this summer.

They were announced as recipients of the MBE for volunteer groups after attending medical emergencies in north Norfolk for more than 10 years.

The Stalham group was nominated by residents in the Stalham area, North Norfolk MP Norman Lamb, and the East of England Ambulance Service NHS Trust (EEAST) for their “amazing service.”

Tim Thirst, one of the CFR group's officers, said they were “immensely proud of this honour. We are also rewarded each time we are able to help someone when they are most in need.”

The awards were created in 2002 to celebrate the Queen’s Golden Jubilee and winners are announced each year on 2nd June – the anniversary of the Queen’s Coronation.

Richard Jewson, Lord Lieutenant of Norfolk, said: “The Queen’s Awards recognise the positive contribution that community groups make to life in Norfolk and I am delighted that we have a winner with Stalham First Responders. I know from experience what a positive and sometimes crucial difference voluntary groups make to the lives of many people in this county.”

In a typical year Stalham CFRs will be on call for around 6,000 hours, travel a total of 5,000 miles and attend to 170 patients. They are trained by EEAST but rely on donations and fundraising to buy new equipment.

For more information about volunteering as a CFR, visit http://www.eastamb.nhs.uk/join-the-team/community-first-responders or email responderadmin@eastamb.nhs.uk