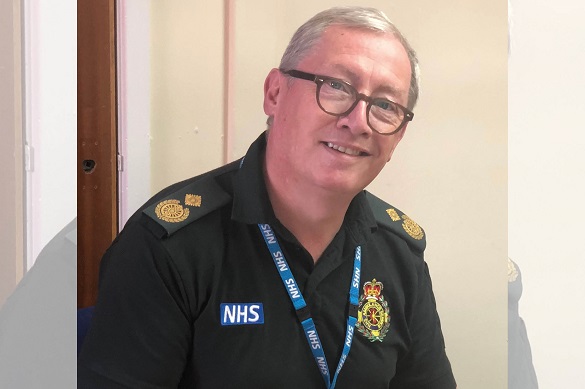 A long-serving clinician with the East of England Ambulance Service NHS Trust (EEAST) has spoken of his pride at being awarded the Queen’s Ambulance Service Medal (QAM) for the dedication he has shown to patient care during a career spanning nearly 40 years.

Paul Henry, Deputy Director of Operations Support with EEAST, has been given the accolade in the Queen’s Birthday Honours list. It comes in recognition of the hard work and dedication he has shown to caring for patients and helping train the next generation of paramedics over nearly four decades.

The announcement was made on Saturday (10 October) – exactly 37 years after Paul, who lives in Norwich, joined the NHS on 10 October 1983.

Paul started his career with Norfolk Ambulance Service and went on to become one of the county’s first paramedics in 1987 before taking responsibility for the training and development of all of ambulance staff in Norfolk four years’ later.

His dedication to patients, colleagues and his profession was recognised in 2000 when he became one of the first paramedics to join the board of the Council for Professions Supplementary to Medicine, where he helped develop regulatory procedures for the profession.

Since then, Paul has gone onto hold a variety of senior operational and management roles with EEAST, as well as taking responsibility for a range of major projects. These include developing business continuity plans to help mitigate the threat of the millennium bug and driving extensive infrastructure improvements, such as introducing new make ready services and new fleet of ambulances over the past year.

“I was absolutely delighted to hear the news – it was such a lovely surprise,” said Paul. “There are so many people in the ambulance service who are deserving of an award, so to be honoured in this way is absolutely fantastic.

“I have fulfilled many varied roles during nearly 40 years with the service, including clinical and operational positions, as well as roles in training and support services. This has given me a significant insight into the way nearly every departments works, which has stood me in good stead throughout my career.

“I am particularly proud of my ability to shape positive change and keep pace with developments in the wider service while always making sure I am ready for the next challenge.”

Marcus Bailey, Chief Operating Officer with EEAST, said: “We are delighted for Paul and incredibly proud that he has been awarded this well-deserved accolade.

“He has dedicated 37 years to the ambulance service, during which time he has devoted his energy and ability to serving patients and helping the Trust to progress and ensure it is prepared to meet future demands.

“On behalf of everyone at EEAST, I would like to congratulate Paul on everything he has achieved during his career and thank him for his hard work and dedication.”