You are in:
Home/ In the news/ Praise for call handler after home birth 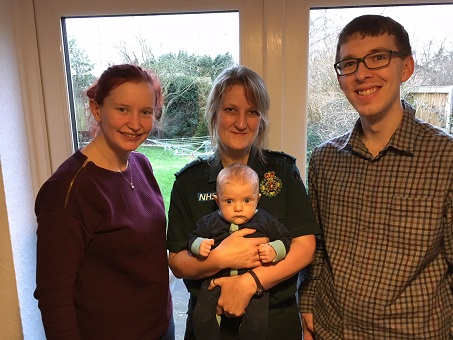 A Cambridgeshire couple have praised an ambulance call handler who assisted with the birth of their first child.

Sue Lamonte met with baby Timothy and his parents this week (23rd January) after helping with his safe arrival into the world.

The emergency call handler was praised for her calmness and professionalism following the quick home birth in Chatteris on 27th October.

Beccy and Mark White had planned on their first child on being born in hospital. However, baby Timothy was born at 3.48am, a few minutes after his dad dialled 999 – five hours after contractions began.

Sue, who has worked for the East of England Ambulance Service NHS Trust (EEAST) for two years in the Norwich Emergency Operations Centre (EOC), gave advice over the phone and stayed on the line until an ambulance crew arrived 25 minutes later.

Mark, who also works for EEAST, said: “Tim's birth had progressed very quickly and took us by surprise. By the time that I recognised his imminent arrival and called for assistance, our stress levels had risen significantly.

“Sue’s manner was professional and calming and allowed us to respond in kind. It felt like she was fully caring whilst allowing us some space to reflect on this sudden change in our family.”

Sue, who has assisted with the birth of six babies during her call handling career, said baby deliveries were one of the highlights of her job.

She said: “I have not delivered any girls and I was hoping it would be a girl so that they might name the baby after me! I got off the phone and said ‘wow’.”