You are in:
Home/ In the news/ Patient’s thanks for life-saving response

Patient’s thanks for life-saving response 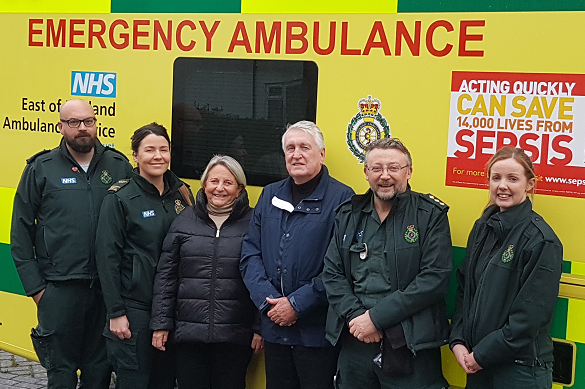 A keen golfer whose heart stopped after she suffered a serious cardiac arrest has issued a heartfelt message of thanks to East of England Ambulance Service (EEAST) crews whose prompt response helped to save her life.

Christina Davies collapsed at her Bury St Edmunds home in September. The first paramedic arrived at her address within just two minutes of being assigned the call, with a further two ambulances on scene just moments later.

The crews were able to take over CPR from Christina’s husband Gareth, who had begun chest compressions under the guidance of an EEAST call handler, before quickly transferring Christina to hospital.

The 67-year-old went onto have a stent fitted in one of her main coronary arteries. She was discharged from Papworth Hospital just a week later and – although she has yet to return to the fairways – is now making a good recovery.

“The crews were brilliant and were here so quickly,” said Christina. “I am so grateful for everything they did and feel like the luckiest person alive. They came to visit us recently and it was so nice to see them and have the opportunity to thank them in person.

“My story just shows how important it is for people to try CPR. You won’t cause the patient any harm, other than some sore ribs, so it has got to be worth it. Gareth hadn’t had any training but the fact that he was able to start chest compressions literally saved my life.”

Around 30,000 people in the UK go into cardiac arrest outside of hospital every year. The chances of surviving drop 10 percent a minute if CPR is not started – which is why it is vital to begin compressions as quickly as possible.

“The call handler was so helpful and talked me through how to do CPR and the right rhythm to use,” said Gareth. “The crews were also fantastic and got to us really quickly before jumping straight into action – both their response and their bedside manner were outstanding. It’s also nice to feel that I helped to make a difference.

“This was a great outcome for the ambulance service and real feather in their cap. It was really lovely to see the crews again, thank them and tell them to keep up the good work.”

Lester Burdiss, Leading Operations Manager with EEAST, was first on the scene. He said: “We are so pleased that Christina is making such a good recovery. Gareth’s prompt actions show just how important it is to start CPR quickly, especially when someone has a cardiac arrest outside of hospital, where survival rates are low.

“We would encourage everyone to learn how to perform CPR. You never know when you may be called on to save a life.”