You are in:
Home/ In the news/ Patient reunited with community first responder who helped save his life

Patient reunited with community first responder who helped save his life 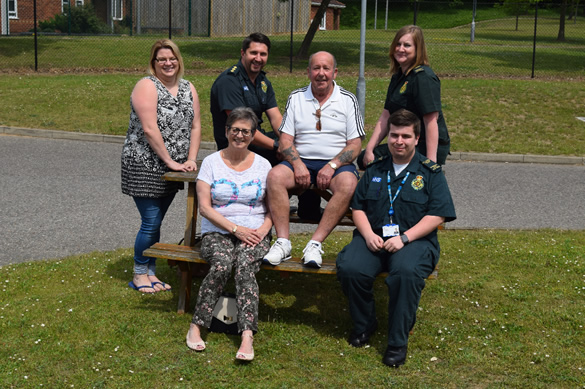 During this year’s National Volunteers’ Week (1-7 June) we are celebrating and highlighting the amazing work of our volunteers.

This includes our community first responders (CFRs) who are trained to attend certain types of emergency calls in the area where they live or work. Their aim is to reach a potential life threatening emergency in the first vital minutes before the ambulance crew arrives.

And this story is the perfect example of the vital role they play within EEAST:

Suffering a cardiac arrest is one thing, but to suffer a cardiac arrest whilst driving is a terrifying experience. Luckily, for Melvyn Lincoln, on the day this happened to him a series of amazing coincidences and quick actions by bystanders and one of our community first responders helped save his life.

When the 999 call was received Community First Responder (CFR) Luke Baldwin was dispatched, arriving on scene in less than four minutes, followed closely by an ambulance crew.

Already on scene were bystanders Zoe Clarke and Emily Brown, who immediately commenced CPR. In a stroke of fate, Zoe also happens to be one of our emergency medical technicians (EMT) and Emily a nurse from the local hospital.

Thanks to the quick actions of Zoe and Emily, Luke who was carrying an automatic external defibrillator (AED) in his kit, was able to shock Melvyn and restart his heart bringing him back to life.

Melvyn, still in a critical condition, was transported by one of our ambulance crews to the Norfolk and Norwich University Hospital where he received specialist treatment and fortunately made a strong recovery.

In an emotional reunion last week at our Norwich Emergency Operations Centre (EOC), Melvyn thanked the volunteer who saved his life, Luke, as well as his ‘angels’ Zoe and Emily.

To Luke, Zoe and Emily he had this to say: “I couldn’t have been luckier to have had Zoe, Emily and Luke there, if it hadn’t been for them I wouldn’t be here today.”

He added: “I don’t remember much but I know that fate brought us together on that day and they saved my life.”

Melvyn, curious about how he managed to receive lifesaving care so quickly, was then taken on a tour of the EOC where he got to see first-hand the triage and dispatch system used by us to rapidly deploy resources to critically ill patients across the region.