You are in:
Home/ In the news/ Norfolk mum’s praise for ambulance staff 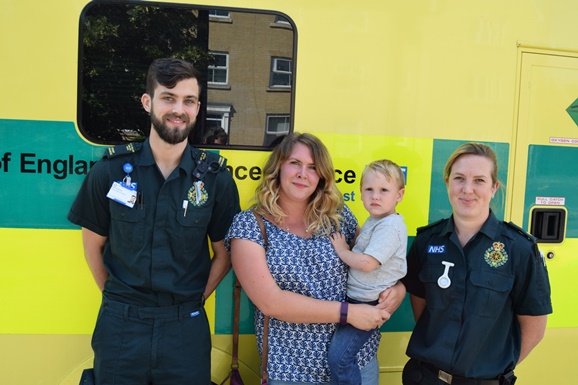 A Norfolk mother has thanked ambulance staff who rushed to her son’s aid when he suffered a serious blood infection.

Shauna Tate called 111 on the morning of March 25th because two-year-old Fox was running a high temperature and was “really floppy”.

The East of England Ambulance Service NHS Trust (EEAST) staff suspected sepsis and blue lighted him to hospital. He was discharged from hospital but two days later, Shauna took her son back after Fox started being sick and his lips turned blue.

A blood test confirmed that Fox had sepsis as a result of a throat infection. He spent eight days in hospital and required an operation to remove fluid from his elbow - but is now on the road to recovery after a six week course of antibiotics.

Shauna said the whole experience was “surreal and petrifying”. However, she was “extremely grateful” to the ambulance staff and Fox joined her to meet the crew at Thetford station on Monday (11th July).

She told them: “Before taking us to the hospital we agreed that Fox had suspected sepsis. Two days later and too scared to waste paramedics’ time again I drove myself at 4am shaking with fear. I trusted your initial instincts and you were right.

“I am so grateful for your confidence and honesty. It could have been too late and it wasn’t. We will always be thankful.”

Shauna is planning on giving something back by training to become a community first responder (CFR) to help patients with life-threatening conditions in the Thetford area.

“I always wanted to do something like that, but was nervous. When I was in hospital with Fox I went into coping mode and now I know I could cope if someone was really unwell,” she said.

Sepsis is a potentially life-threatening condition, triggered by an infection or injury.

Early symptoms of sepsis may include:

For more information about spotting the signs of sepsis and what to do, visit http://www.nhs.uk/conditions/Blood-poisoning/Pages/Introduction.aspx