You are in:
Home/ In the news/ Norfolk man meets the emergency crews who helped save his life

Norfolk man meets the emergency crews who helped save his life 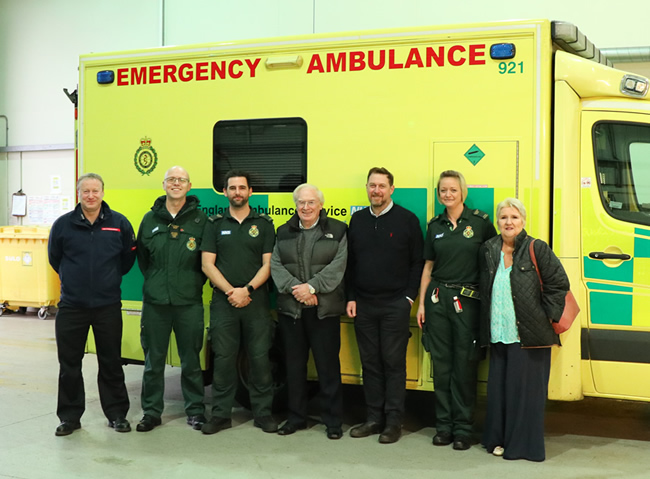 The heartfelt words of Alan Wishart who visited Longwater ambulance depot to meet the team from the East of England Ambulance Service (EEAST) and Norfolk Fire Service who worked to save his life back in September.

On the evening of the 6th September Alan, 70, was sat in bed doing a Sudoku puzzle while his wife Avril watched TV, when he collapsed and stopped breathing – he was in cardiac arrest.

Paul Wishart, Alan’s son, lived only two doors down and received a text to come quick as something was wrong.  On his arrival, his first aid training kicked in and he knew that he needed to start CPR so he got his dad onto the floor and started chest compressions.

Senior paramedic, Simon Cross and Kate Nichols, senior EMT, were first on scene arriving within four minutes of the 999-call coming in.

Simon Cross said “We arrived and went up to find Paul giving CPR. We were surprised as it is not often that we find people attempting CPR. He was doing such a good job it gave us a moment to clear some space before allowing us to take over and help Alan further.”

After receiving two shocks, Alan had a return of spontaneous circulation (ROSC) and needed transporting to the Norfolk and Norwich University Hospital (NNUH).

The crews knew that getting Alan out of the property was going to be tricky, so they requested Norfolk Fire Service to attend.  Two Norfolk Fire crews arrived and went to swift work on the house, removing a door and bookcases, while the EEAST crews carried on working on Alan.

Kate Nichols, senior EMT at EEAST said “After we had handed over Alan to the hospital staff, I went past the waiting room. I’ve never seen so many people there for one person before.”

Ten days later, Simon was at the hospital and decided to go and check on Alan and see how he was doing.

Simon said “After asking the nurse on the ward where I could find Alan, expecting to find him in bed. She pointed to a man standing up and looking out the window. I was completely blindsided by his recovery.

Alan had woken five days after the incident with no memory of what had happened.

Simon said “This is a great example of the chain of survival at work - the importance of early CPR, early response and early defibrillation. Paul was amazing and gave such good CPR. His actions are why we are all standing here today”.

Paul Wishart added “The whole family is hugely grateful and in admiration of the emergency services and what they did on the night, also the job they do day to day. Because of them we still have our dad / grandad with us. These guys deal with hundreds of emergencies each year, even putting up with abuse and violence in some cases, and yet Simon still took the time to seek out Dad in hospital days after and visit – amazing!”

Alan’s recovery has been incredible and he is back to playing Golf and Sudoku!