You are in:
Home/ In the news/ Norfolk girl reunited with life-savers after cardiac arrest 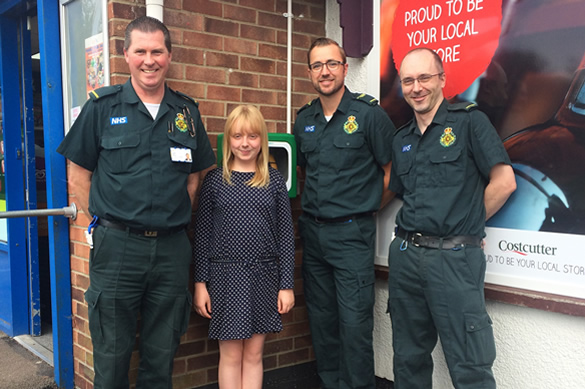 A Norfolk mother has spoken of the importance of defibrillators after her daughter went into cardiac arrest.

Jayne Biggs heard a cough from her daughter’s bedroom to find seven-year-old Violet not breathing.

But thankfully, her parents acted quickly by performing cardiopulmonary resuscitation (CPR) before the arrival of ambulance staff who resuscitated her at the family home

And three years later, the girl from Bradwell, Norfolk, who was diagnosed with a rare heart condition following the traumatic incident, has been reunited with some of her East of England Ambulance Service NHS Trust (EEAST) life-savers.

Jayne found Violet at about 11pm on 23rd February 2013 and within minutes of calling 999 Lee Kinney and Ryan Nelson were on scene followed by Ken Peace and Michael Long in another ambulance. After one shock from a defibrillator, they managed to restart her heart.

Violet was taken to the James Paget University Hospital then transferred to London’s Great Ormond Street Hospital where she was diagnosed with Long QT syndrome, which affects her heart rhythm, and had an operation to insert an implantable cardioverter defibrillator (ICD) in her chest.

Jayne, who has since set up Heart 2 Heart Norfolk to install defibrillators in schools and public places, said it was “really emotional” meeting with Ken, Ryan and Lee on July 13th.

She said: “I can't praise the hospital staff and paramedics enough. She had everything on her side that day.

“If the paramedics hadn't shocked Violet with the defibrillator she wouldn't have made it. If you suffer a sudden cardiac arrest your chances of survival with no CPR is 5%, with CPR it is 9%, but with CPR a defibrillator and a shockable rhythm, the chances are over 50%.

“It was really lovely to meet them and they were all thrilled to see her.”

Jayne has managed to secure funding for seven defibrillators in the last year, with the most recent being installed at the Post Office in Bradwell and one at the Pier Hotel in Gorleston.

Jayne added that she would continue to raise money for the life-saving devices and coordinate CPR and defibrillator training.

“I think we are really quite lucky in Norfolk. There has only been one school where they would not have a defibrillator put in. The majority of people have been really supportive and every high school in Gorleston now has one and every school in Bradwell.”

“Violet was so fit and active and she had never felt dizzy or faint until her cardiac arrest. I am going to keep going and install defibrillators in as many places as possible. It does not matter if they are ever used. However, they are there just in case.”