You are in:
Home/ In the news/ Norfolk cardiac arrest survivor reunited with her life-savers 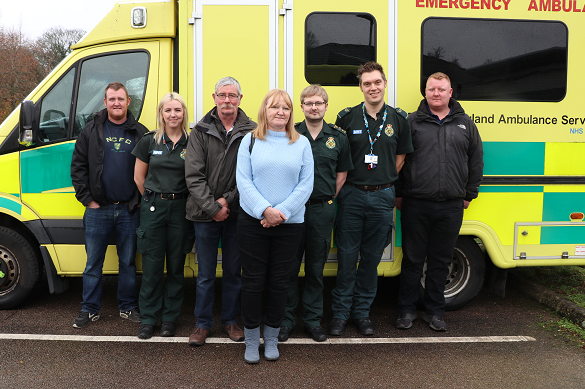 Sue Purvis, 62, from Norfolk was given the opportunity to be reunited with the team that saved her life when her heart stopped beating in her Wymondham home, and convey a special thank you to the call handler who took her call.

On 7 June, the East of England Ambulance Service NHS Trust (EEAST) Norwich control room received an emergency 999 call from Mark Purvis, after he witnessed his wife Sue collapse in their kitchen whilst she was cooking dinner.

John Chapman was the EEAST call handler who took the call at 4.50pm and proceeded to talk Mark through how to do cardiopulmonary resuscitation (CPR).

Also, in the house at the time was the couple’s son, Stuart Purvis who was able to take over CPR from his father until the EEAST crew arrived.

After receiving three shocks, and a shot of adrenaline, Sue was successfully resuscitated by the crew and transported to the Norfolk and Norwich University Hospital (NNUH).

Bryony said: “We were all pleasantly surprised to find Sue sitting up and trying to talk whilst travelling in the ambulance.

“She was in such good condition by the time we reached the hospital, even the doctors were shocked she’d had a cardiac arrest just half an hour before!”

Just a few months later, Sue wrote a letter to the patient experience department at EEAST.

In her letter, Sue wrote: “It has taken a long time for me to write this letter because I have been unable to select the appropriate wording to reflect my feelings.

“I have, however, decided that some words are better than none.

“Maybe all I need is a million ‘thank yous’ to the people who take the 999 calls.”

She was able to say thank you in person to her call handler, and some of the team that saved her life, when she reunited with them this week accompanied by Mark, Stuart and her other son Chris.

Sue said: “My family and I cannot ever thank these people, and in fact all of their colleagues, for the amazing work they do.”