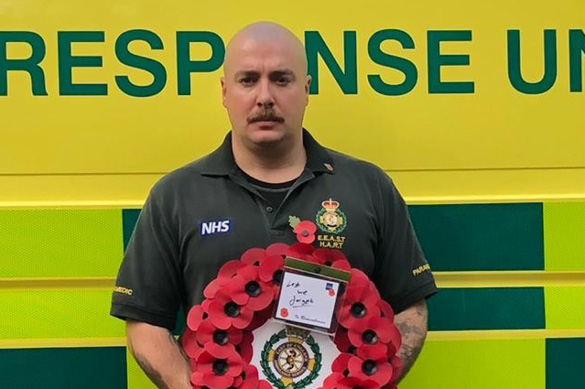 A specialist paramedic with the East of England Ambulance Service NHS Trust (EEAST) has spoken of his “immense pride” after being named as a recipient of the British Empire Medal in the Queen’s New Year Honours.

Dave King, who lives in Cambridgeshire, was included in the honours list in recognition of his services to the NHS and to fundraising.

It comes after Dave raised more than £10,000 by completing everything from skydives to sponsored cycles and a 100km Saharan trek for the Royal Marsden Hospital, as a way of saying thank you for the care they gave both his nan and mum.

In addition, Dave spent around eight years volunteering with the Guideposts Trust, where he provided mental health support to young people aged between 18 and 30. He has also completed a mammoth stair climb for Shelter and a fire walk for the Watford Peace Hospice, and regularly collects toys to donate to the children’s wards at Addenbrooke’s Hospital.

Dave, who is part of EEAST’s hazardous area response team based in Melbourn, said: “I thought it was a hoax when I first received the email telling me about the honour. But now it has sunk in I am immensely proud to be recognised.

“I’ve been fundraising for the Royal Marsden Hospital for about 15 years as it holds a special place in my heart because of the care the staff provided to my nan and mum. My reasons for volunteering with Guideposts were also quite personal as I had some friends who had experienced mental health issues, so wanted to do what I could to give something back.

“I’m now training to walk 100km from London to Brighton in just 24 hours, which I hope will take place at the end of May.

“I really enjoy my charity work and don’t do it to get awards. But to receive the recognition in the Near Year Honours is greatly appreciated and something of which I’m really proud.”

Dr Tom Davis, acting chief executive at EEAST, said: “The NHS has been in the spotlight like never before over the past year, and I am delighted that Dave and other colleagues from across the country are rightly being honoured for their commitment, dedication and professionalism.

“These are difficult times, but I do hope Dave and his family manages to find time to celebrate his award safely. We forward to seeing a picture of Dave with his British Empire Medal in the future.”