You are in:
Home/ In the news/ Motorcyclist thanks his life-savers

Motorcyclist thanks his life-savers 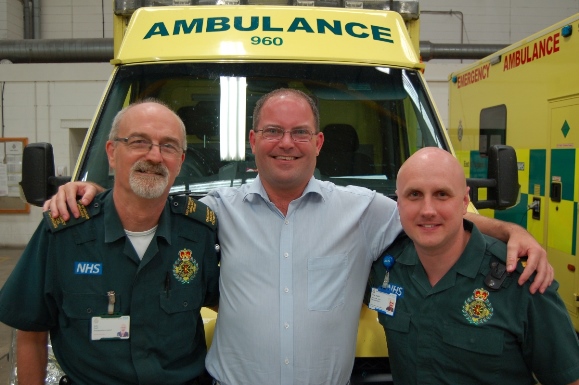 Adam Shailer is a lucky man to be alive today to say thank you.

The father-of-two from Cambridgeshire, who was seriously injured in a crash on the B1090 at Abbots Ripton on 9thAugust 2016, was this week reunited with some of the East of England Ambulance Service NHS Trust (EEAST) staff who saved his life.

The 35-year-old said it was impossible to put into words his gratitude for the EEAST and Magpas Air Ambulance medics who rushed to his aid. The Ministry of Defence civil servant says he cannot remember anything from the collision, which happened as he rode to work.

“I am extremely lucky to be alive and not to have suffered any head injuries. It has been a struggle and it will be for a few years yet.  I have lost memories of part of my son’s birth who was born two weeks before,” he said.

Five EEAST staff and medics from Magpas treated him before taking him to Addenbrooke’s Hospital in a critical condition. He was back on his feet four months after the collision and continues to receive rehab as he continues his recovery.

He said: “The worst thing is not knowing what to say. You cannot just say thank you because it does not cover it."
Colin said seeing Adam doing so well following the collision was all the thanks they needed.
“It was a very serious job and for a patient to survive something that serious is quite unusual,” he said.