You are in:
Home/ In the news/ Mobile stroke unit set to hit the road 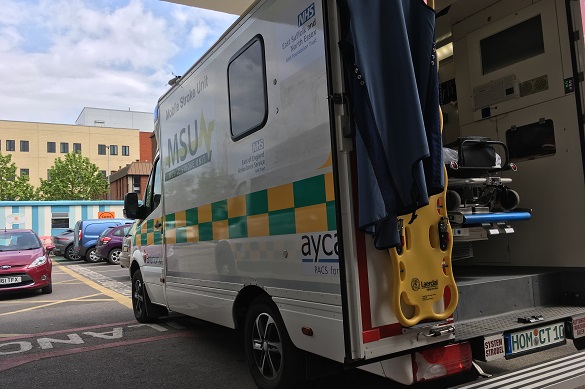 EEAST is a leading partner in a ground-breaking mobile stroke unit which could save patients from death or serious disability by making sure they receive fast access to the right treatment.

In the Ipswich area, calls to suspected strokes will be attended by a modified ambulance with specially trained crews which can give the patient a CT scan in the vehicle before administering clot-busting thrombolysis treatment where appropriate.

It is hoped the initiative will significantly reduce the crucial ‘door to needle’ time between the initial call to the ambulance service and the moment the drugs are given, in turn increasing the patient’s chance of making a good recovery.

It is being tested in Ipswich by a partnership of the East of England Ambulance Service NHS Trust (EEAST), East Suffolk and North Essex NHS Foundation Trust (ESNEFT), which runs Ipswich Hospital, and experts who have successfully trialled a similar scheme in Germany.

Ipswich has become only the second hospital in the country to pilot the unit following a successful trial at Southend Hospital, where thrombolysis time was cut from 75 minutes to just 42.

Dr Sajid Alam, Stroke Consultant at Ipswich Hospital, said: “We are delighted that we have been chosen to help trial this exciting initiative. Beside a CT scanner, the stroke ambulance also includes a range of other high-tech equipment, which will enable the crew to diagnose and treat the patient on board, rather than losing valuable time transporting them to hospital.

“This is especially vital with strokes, where every minute of delay can result in the loss of two million brain cells and lead to serious disability or even death. We anticipate that the stroke ambulance will allow us to administer clot-busting drugs within just 60 minutes of the stroke happening, which could make a really significant difference to the outcome for these patients, and in some cases even save lives.”

The ambulance will be manned by the honorary visiting Neurology Consultant, Professor Silke Walter and Dan Phillips from EEAST.

Dr Tom Davis, Medical Director of EEAST, said: “We’re very pleased to be taking a leading role in these trials. Getting precisely the right care and treatment to patients as quickly as we can is an essential part of modern pre-hospital care.

“We provide services across six counties in the East of England, including rural areas where travel time to hospital can be a significant factor for stroke patients, so we will be participating in this trial with great enthusiasm.”

The trial will initially run for two weeks from 8th May, between 9am and 5pm on Monday to Friday. If it is a success, Ipswich Hospital will then be invited to take part in a wider research project testing the impact and viability of the unit.