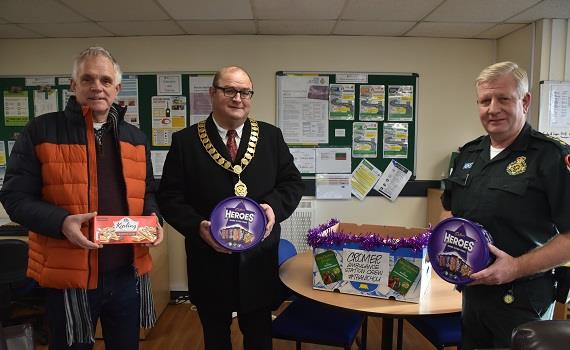 Cromer Town Mayor Pat West visited his local ambulance station to thank staff for their hard work during a challenging year for the East of England Ambulance Service.

The Mayor, accompanied by members of EEAST's Community Engagement Group for the Norfolk and Waveney sector, came armed with treats donated by the Morrisons store in Cromer to present to crews at the station on Thursday 8th December.

Dale Meacham-Roberts, the Leading Operations Manager at EEAST, said: “We were pleased to welcome to the station the Cromer Mayor, Mr Pat West, and as always appreciate the keen interest he and the Cromer Town Council take in the activities of the station staff and EEAST’s contribution to patient care in the local community.

“We at Cromer station are proud to serve the local community and are grateful for their support, the support of the CEG and that of the local Morrison branch.”

David Russell, the Ambulance Service Community Engagement Co-ordinator for the Norfolk and Waveney Sector said. “My Group were most pleased that the Mayor was able to come along and visit the Station and also present on behalf of Cromer Morrisons their box of Christmas fayre for the crews.”