You are in:
Home/ In the news/ Lord Mayor and Sheriff of Norwich thank ambulance staff for commitment 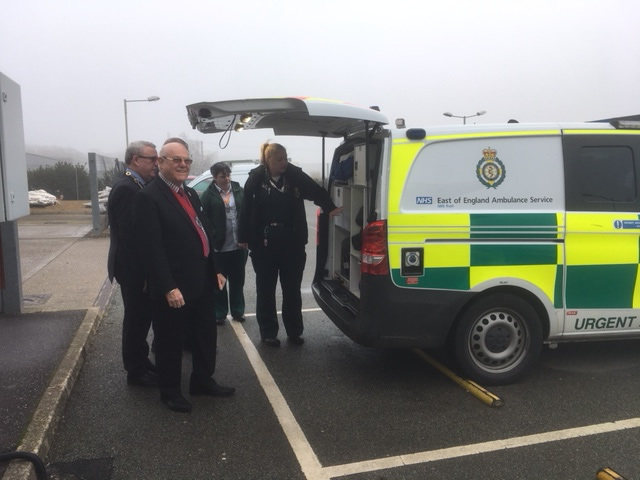 Ambulance staff in Norfolk have been praised following a recent visit.

David Fullman and David Walker, the Lord Mayor and Sheriff of Norwich, visited the ambulance depot in Alex Moorhouse Way to meet staff of the East of England Ambulance Service NHS Trust (EEAST).

They met with Senior Locality Manager, Diane Chan and had a tour of the ambulance depot, where they spoke with and thanked staff for their continued hard work and dedication to patients, especially during the challenging winter period. They were also very keen to see the early intervention falls vehicle (EIV), and spoke with the EIV team about how the vehicle is used and the patients they help.

David Fullman said: “One of the great things about being Lord Mayor is that is gives you the opportunity to say thank you to people who don’t get thanked. And one of the things about the ambulance staff is that everyone knows when something goes wrong but they don’t know when it goes right.  Thank you to everyone for all the hard work you do, it really is appreciated.”

David Walker, Sheriff of Norwich added: “We wanted to come because we recognise individual teams and practitioners are doing an absolutely fantastic job”.

Diane Chan, SLM for EEAST said: “It was lovely to be approached by the Lord Mayor and Sheriff who were so keen to come down and show support for our staff in person.  They took the time to talk to everyone, from our admin teams, ambulance fleet assistants, through to our front-line clinicians.   It was a pleasure to have them come and spend time on station and to update them on new projects and the challenges we face. We really appreciate their kind words, continued support and interest in the work we do.”