You are in:
Home/ In the news/ #Impact young driver campaign rounds off academic year with city centre demo 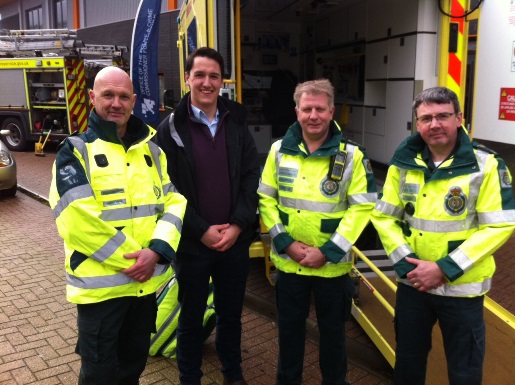 As the summer holidays loom, the team behind a road safety campaign targeted at college and sixth form students is rounding off another successful year with a demonstration in the heart of Norwich.

The #Impact campaign – the initiative of Norfolk’s Police and Crime Commissioner (PCC) Lorne Green – has been touring schools and colleges across the county since it was launched two-and-a-half years ago.

Next week it will deliver its hard-hitting road safety messages to students of Sir Isaac Newton Sixth Form, who will take part in a ‘crashed car’ demonstration outside The Forum.

Since its launch, 5,800 young people have been involved in the initiative which is actively supported by Norfolk Constabulary, Norfolk Fire and Rescue Service and the East of England Ambulance Service. During the 2018/19 academic year, the partnership team has delivered 17 #Impact demonstrations.

PCC Lorne Green said: “I take very seriously the pledge I have made to do all I can to prevent young people from being seriously injured or killed on our roads. Thanks to the dedication of the #Impact team and the backing of colleges and sixth forms across Norfolk, we’ve had another hugely successful year reaching nearly 2,000 young people since September.”

Next week’s event will start with the sixth form students watching a video of Thomas Semmons, from Scarning near Dereham, who was seriously injured after losing control of his car in bad weather on the B1145 in Norfolk. Thomas talks about his experience and the effect the crash had, not only on him but also on his loved ones. His car also tours with the campaign – showing the very real impact of what can happen when things go wrong behind the wheel.

Students will then head over to the space outside of The Forum to observe the #Impact demonstration, with volunteers experiencing what is involved in having emergency services work to free them from a vehicle, as well as facing police questioning and arrest.

At the close of the event, students will be asked to reflect on what they have been part of, making their own pledge to being safe on Norfolk’s roads.

Inspector Jon Chapman from Norfolk Constabulary said: “Young drivers are disproportionately represented in casualty statistics which is why it’s so important we educate young people about the risks on the road and the Fatal 4 - whether it be drink and drug driving, not wearing a seatbelt, using a mobile phone behind the wheel or excess speeding.

“Education is key to this and what #Impact delivers is a powerful and thought-provoking presentation showing the stark reality of what can happen if you get it wrong. We’re committed to working with our partners to improve road safety and the mock collision display helps to focus the attention of students.”

The PCC added: “While the demonstration on Monday will be specifically targeted at the sixth form students, my hope is that the event may draw the attention of other young drivers – or, in fact drivers of any age - in the area on the day.

“The hard-hitting but massively important #Impact messages – particularly about the responsibility we accept when we get behind the steering wheel, and the potential consequences when we don’t take that responsibility seriously – are a useful reminder for us all as we enjoy the summer months ahead of us.”