“I feel incredibly grateful – I am a very lucky man” 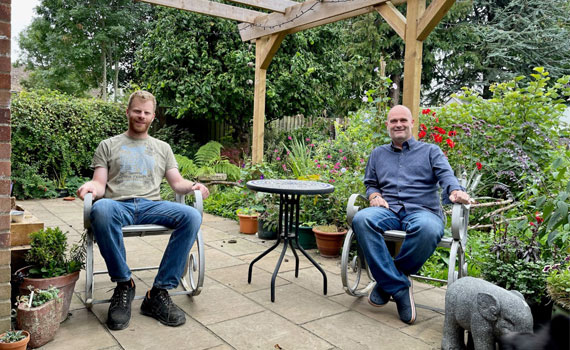 A farmer who was inspired to become a community first responder (CFR) after having a cardiac arrest has helped to save the life of a neighbour exactly a year to the day after qualifying.

David Walston, who lives in Thriplow, joined the East of England Ambulance Service (EEAST) as a volunteer CFR as a way of saying thank you for the care he received after having a cardiac arrest in July 2019 when he was aged just 37.

And although David’s life-saving skills have been put to good use several time since, they were called into sharp focus during August when he was called to a neighbouring village to help Darren Mullett, who had also suffered a cardiac arrest.

“My interest in becoming a CFR was sparked by my cardiac arrest and calls like this make it all worthwhile,” said David. “There were a lot of parallels with what happened to me and I felt quite emotional afterwards, especially as Darren’s cardiac arrest took place exactly one year after I qualified as a CFR.

“The earlier people receive treatment after a cardiac arrest, the better their chances of surviving. The first shock from the defibrillator made the difference for Darren and I was really pleased that I was only five minutes away when I received the call.”

Darren was rushed to Papworth Hospital following the incident where an operation took place to fit him with a stent. He is now recovering at home.

“I didn’t have any warning signs at all,” said Darren. “I had just finished cutting my neighbour’s hedges and my shoulders began to ache. I went inside and thought I’d go for a lie down, and from that point onwards everything is a little murky.

“I feel incredibly grateful that David was on duty and able to respond so quickly when he got the call. I’ve seen him a couple of times since which was great as it gave me the chance to say a proper thank you to him.

“The ambulance crews who came were also fantastic and got here really quickly. I am so grateful that the help was there when I needed it the most, and feel like a very lucky man.”