You are in:
Home/ In the news/ Hundreds learn to save a life at Royal Norfolk Show

Hundreds learn to save a life at Royal Norfolk Show 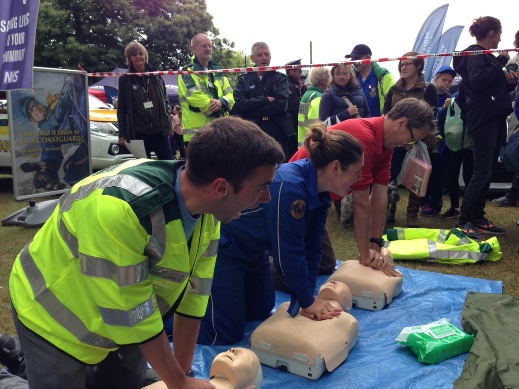 Hundreds learnt to save a life during the Royal Norfolk Show.

Staff and volunteers from the East of England Ambulance Service NHS Trust (EEAST) took part in the two day event and were part of the award-winning emergency services village.

More than 800 children were taught cardiopulmonary resuscitation (CPR) during the show by community first responders (CFR) and EEAST staff.

Andrew Barlow, EEAST Community Collaboration Manager, said: “It was fantastic to teach so many children CPR over the two days and hopefully it has sparked their interest in emergency healthcare.

We had a really positive response from people wanting to join community first responder schemes across Norfolk and people interested in joining the ambulance service.”

The emergency services village won the best trade stand award during the show.

More children will learn life-saving skills on Restart a Heart Day on 16th October. Schools in the East of England are being urged to sign up by visiting http://www.eastamb.nhs.uk/your-service/campaigns/restart-a-heart-school-sign-up.htm