Helping others in Adam’s memory 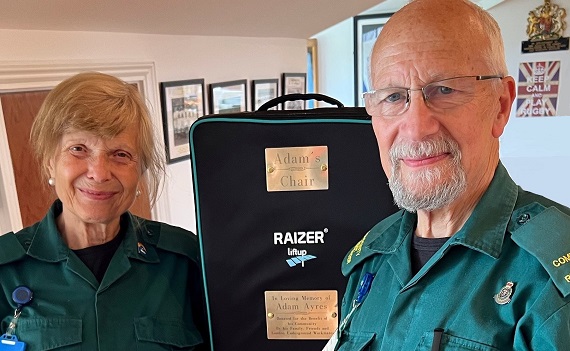 The family of a young man who died suddenly have thanked volunteers with the East of England Ambulance Service NHS Trust (EEAST) for the care they provided by gifting them specialist equipment in memory of their son.

Adam Ayres, from North Weald, was just 38 when he collapsed on Epping High Street while on a night out in September 2020.

Adam’s family were so grateful for the help he received that they asked for donations instead of flowers at his funeral and set up a JustGiving page in his name – and were overwhelmed by the response. Adam’s colleagues from London Underground also raised money in his memory, with both sums together totalling more than £7,000.

The money has been split between three different causes, including the family’s local CFR team. It has been spent on a specialist Raizer II lifting chair which helps get patients who have fallen up and moving again, without the need for a transfer to hospital wherever possible.

John said: “I’m absolutely delighted that Adam's parents, Sue and Chris, chose to donate this piece of kit to us and have already used it with several of our patients. We attended one elderly patient on Christmas Eve and were able to lift them safely and discharge them at the scene thanks to Adam’s chair, which meant they spent Christmas at home not in hospital.”

Sue added: “John told us that he’s used the chair several times already. One patient’s relative asked him about the chair, and he told them the story behind it. The relative said they were so grateful that despite our tragic loss we had thought of others, but that was our Adam – he was just so caring.

“He would always give money to homeless people, and told his mates he did it because that could easily be him, or them. That’s why we did what we did – because it’s what Adam would have done. It makes us happy to think that despite losing him, we’ve been able to do something in his memory that can really benefit our community.

“The work the CFRs do is really wonderful. I don’t know what we’d do without them.”

Community first responders are volunteers who are trained to attend certain types of emergency calls in the area where they live or work. Their aim is to reach a potentially life-threatening emergency in the first vital minutes before the ambulance crew arrives so that they can help stabilise the patient and provide appropriate care until back up arrives.

Find out more about becoming a CFR.