You are in:
Home/ In the news/ Green-fingered firefighters display appreciation to ambulance service colleagues 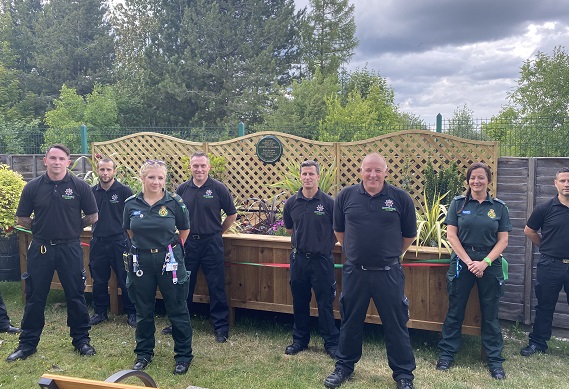 Bedford firefighters enlisted to help East of England Ambulance Service (EEAST) drive ambulances during the Coronavirus pandemic have designed and built a memorial garden at Luton ambulance station to show appreciation to their new workmates.

The inspiration for the ‘DIY SOS’ makeover came after the firefighters from Bedfordshire Fire and Rescue saw two bouquets in the garden in memory of much-missed ambulance workers who had died of cancer and suicide.

They strongly felt that a much grander tribute was needed which would also serve as a tranquil environment for their new colleagues, who had made them so welcome during their placement.

With no Percy Throwers or Alan Titchmarshs in the group, the firefighters sought the help of Bruce Liddle of Newbury Farm Plant in Silsoe who not only gave advice on the design of the garden but also supplied the plants for free.

Mike King, one of the firefighters working as an ambulance driver at EEAST, said: “The fire team have really enjoyed working alongside such a passionate and dedicated group of people during the pandemic.

“They have made us feel so welcome and we thought the best way to say thank you was to leave a lasting memory by building the memorial garden – something they have been trying to get enough funds together to build for some time.

“We wanted to ensure that it was just right, knowing full well how important it is to them, and I am glad it has been so well received.”

Simon King, head of operations at EEAST for Milton Keynes, Bedford and Luton, says the whole of the team have been bowled over by the gesture.

“I would like to thank the firefighters for this phenomenal gift which has been so appreciated by everyone in the team,” he said.

“The way the firefighters have fitted into the teams right across Bedfordshire has been remarkable and both services are looking to build on this collaborative spirit and camaraderie. There are already a number of projects we are working on together to benefit patients.

“The garden itself is magnificent and is a fitting tribute to our much-missed colleagues.”