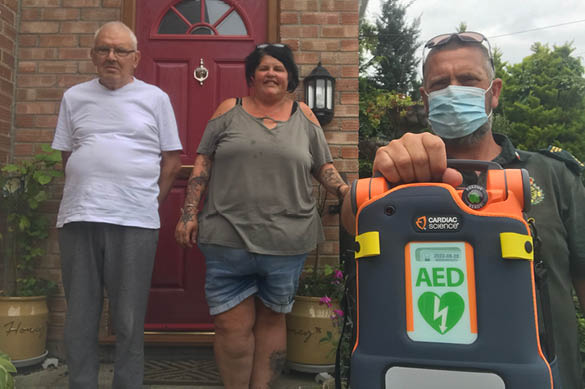 GoodSAM volunteer, and EEAST Emergency Medical Technician (EMT), Martin Grove now has his own defibrillator to use when he attends patients in a volunteer capacity, thanks to a local family from Beccles.

GoodSAM is a scheme which alerts appropriately trained, off-duty or volunteer healthcare professionals to patients who are suffering a cardiac arrest within an 800-metre radius of where they are. Once registration is approved, the responder can then download the GoodSAM app which not only alerts them to the incident, but also notifies them of the nearest defibrillator and the code to use to access it.

Back in February, Martin was called to attend a patient, Penny Ling, who had collapsed at her home in Beccles. Sadly, Penny died but her husband, George Ling, and her daughter, Erica Brennan, contacted Martin shortly afterwards to say the family wanted to donate towards Martin getting a defibrillator of his own to use on GoodSAM calls.

Martin received the GoodSAM alert as he was heading to bed, ‘I live in Beccles and knew where to go, but I also knew that I’d have to make a call about whether to go one way and grab the local Automated External Defibrillator (AED), or head the other way and go straight to the patient. With a cardiac arrest, every second counts, and whilst an AED is important, it is also crucial to carry out CPR and be able to continue it until help arrives. I took the decision to go directly to the patient.

‘When I arrived at the house, I found the patient collapsed. Her husband was with her and her daughter, Erica, was performing CPR but despite the ambulance crew arrived shortly afterwards, with an AED, sadly we were unable to save Erica’s mum and she died at the scene.

‘I spoke to Erica afterwards and when we talked through what happened I explained about my decision to come straight to her mum, rather than stop to get the AED. Erica understood the difficulty of that decision and a week later, following the funeral, she got in touch to say that the family wanted to donate towards an AED for me to carry. The family’s donation was matched by the EEAST charity and using that money I was able to purchase my own AED.

‘This generous donation really will make a difference to many lives. When a call comes in, I will no longer be questioning whether to spend time going to grab an AED on the way, I can just head straight to every patient and hopefully save some of those vital early minutes.’

Erica explained why making the donation was important to the family.

‘I began CPR but when Martin arrived at my mum’s that night, I have never been so relieved to see someone. He came in and took over and I really did breathe a sigh of relief, I was just extremely grateful.

‘When I spoke to Martin afterwards and he explained the situation with the defibrillator, as a family, we knew we wanted to donate towards getting him an AED of his own. Myself, my sister and lots of our family and friends live in and around Beccles and it was important to us that the next time Martin got a call he would be able to head straight to his patient and have a defibrillator on hand. It was something we could do in mum’s memory that, hopefully, will make a big difference to patients in our area in the future.’

You can find out more information about the EEAST Charitable Fund and their work.

Further information about GoodSAM is available on the GoodSAM website.