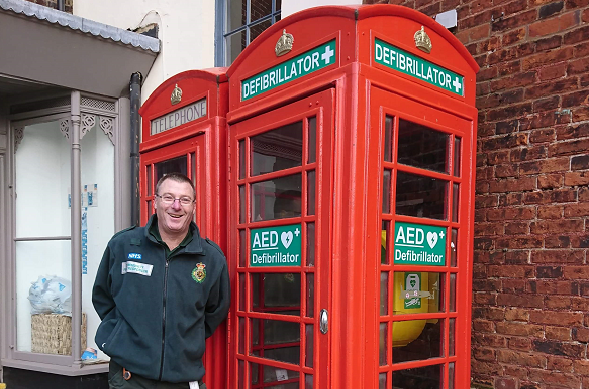 A Community First Responder (CFR) from Norfolk teamed up with a local care home and raised enough money to provide his local town centre with two defibrillators.

Neil Gudge, a CFR covering Loddon, Norfolk, said: ‘As well as being a CFR for the East of England Ambulance Service (EEAST), I’m also a member of the General Townsend Club in Fakenham, as part of their darts team. Each year, the club raises funds for various charities. At the beginning of 2020, I suggested raising funds for a Public Access Defibrillator to be mounted on the wall outside the club.’

‘We ran various charity events, including a pool contest and a darts knock-out competition. I also ran a "Restart the Heart" event showing members how to carry out CPR and use a Public Access Defibrillator.

Neil said, ‘The lockdown restrictions which came into effect last year meant that we were unable to continue with fundraising events. However, following the death of a Fakenham lady who suffered a cardiac arrest in the street an appeal was posted on social media by Woodspring Care Home about raising funds for a village defibrillator. I contacted them to explain I was also in the process of fund raising for this and I’m delighted to say we joined forces. With the support of donations from local companies, we successfully funded two Defibrillators for Fakenham Town Centre.’

The defibrillators have now been installed, one in the red telephone box in the centre of town and one outside the General Townsend club.

Neil added, ‘I would like to thank everyone from the community, both individuals and businesses, who have helped and donated to such a wonderful cause.’

Andrew Barlow, Community Response Manager for Norfolk, Waveney and Suffolk, said: ‘Community public access defibrillators (CPAD) really can make a big difference in cardiac arrest situations where every second counts. CPADs can be accessed by any 999 caller at any time, they will be given a code to access the device by our call handler. It’s great to hear that local communities are fundraising in order to have CPADs installed as they really will save lives in the future.’

If you are interested in finding out more about becoming a CFR please email: CFR@eastamb.nhs.uk or visit the EEAST website.