You are in:
Home/ In the news/ Father thanks his lifesavers after drama at the dogs

Father thanks his lifesavers after drama at the dogs 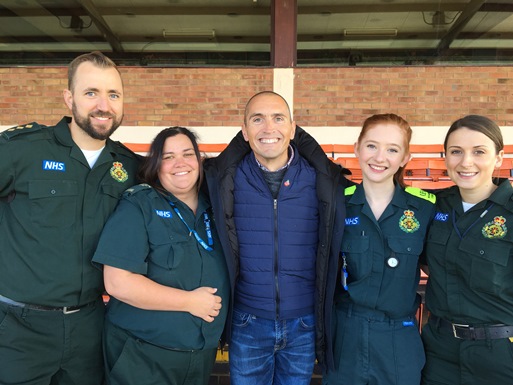 A father-of-two praised his “heroes” in green after being reunited with the ambulance staff who helped save his life.

Luke Chapman, who lives on the Essex-Hertfordshire border, was watching the greyhound racing at Yarmouth Stadium, in Norfolk, with his family on 29th April when he collapsed.

The 43-year-old’s heart had stopped and he urgently needed life-saving treatment.

Thankfully, Luke’s sister-in-law Rebecca Chapman, a physiotherapist, knew how to do cardiopulmonary resuscitation (CPR) and paramedic Harriet Sutherland and University of East Anglia (UEA) student paramedic Sophie Murgatroyd were minutes away in a response car.

Following three shocks from a defibrillator, Luke was resuscitated and was sitting up and talking to medics and his family within 20 minutes of his heart stopping.

Luke, who remembers nothing of the event, returned to Yarmouth Stadium this week (6th November) to thank staff from the East of England Ambulance Service NHS Trust (EEAST) and staff from the venue who helped him.

He told them: “The fact that I am here today is because of you. You are real heroes and you do this every day and rarely get thanked. Thank you is not enough.”

“The care I received was superb and I am very lucky. I could not fault the whole service from start to finish.”

The East Anglian Air Ambulance was also dispatched to Luke who was taken by land ambulance to the Norfolk and Norwich University Hospital where he had an implantable cardioverter defibrillator (ICD) fitted in his chest.

Luke added that he never claimed his £21 winnings from that night at the races. However, he plans to return with the family near to the anniversary of his cardiac arrest.

Harriet said that she was “shell-shocked” that Luke was sitting up and talking so soon after his heart stopped.

“From getting the call we were at the stadium within three or four minutes and 15 minutes later he was sitting up. Good early CPR and early defibrillation was the key. It is good to see him looking so well.”

One of Luke’s sons sold sweets at school and raised £150, which has been donated to the East of England Ambulance Service Charitable Funds.