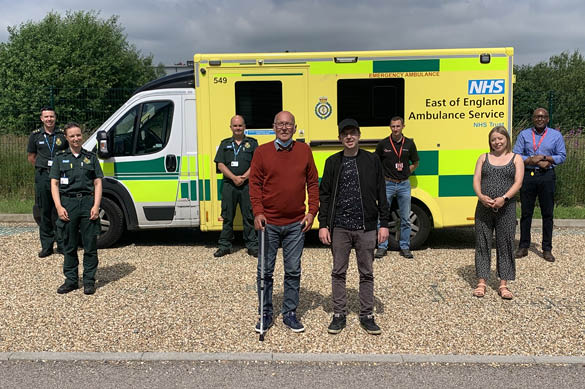 Last week, two patients visited Waveney Ambulance Depot to thank the staff who responded to a serious road traffic collision they were involved in during May 2020.

Peter Ellis and his son Paul were involved in a serious head-on traffic collision on the A146 near Hales, just outside Norwich. Paul was fortunate to walk away from the scene with only minor injuries, however, his father suffered life changing injuries.

On the day of the incident, crews from both Waveney ambulance station and the East of England Air Ambulance Service attended the scene.  An ambulance staffed by Beth Taylor and Becky Symonds was first to arrive and they assessed Peter, who was trapped in the vehicle with significant major injuries.

HEMS assistance was requested due to the nature of the patients' injuries and to provide advanced management. Together EEAST, HEMS and the Fire Service were able to free Peter from the vehicle, provide treatment at the scene and transport him to Norfolk and Norwich hospital.

After weeks in hospital, following surgery and treatment, Peter is now making a good recovery and was pleased to be able to thank those who had helped him. He said, ‘It was so lovely to finally be able to put faces to the voices I remember."

Paul also had the opportunity to thank the team for the support they gave to them both and said: ‘Neither me nor dad and would be here today if it wasn't for them.’

Stuart Knight, Leading Operations Manager, Waveney, said, ‘In 11 years' service, this was one of the most challenging patient extrications I have been involved with. It was a pleasure to meet up with Peter and his son, Paul, again last week. Peter’s recovery to date is nothing short of remarkable and our team has great admiration for his positive attitude and determination. We wish him all the best and thank him and his family for his kind words.’