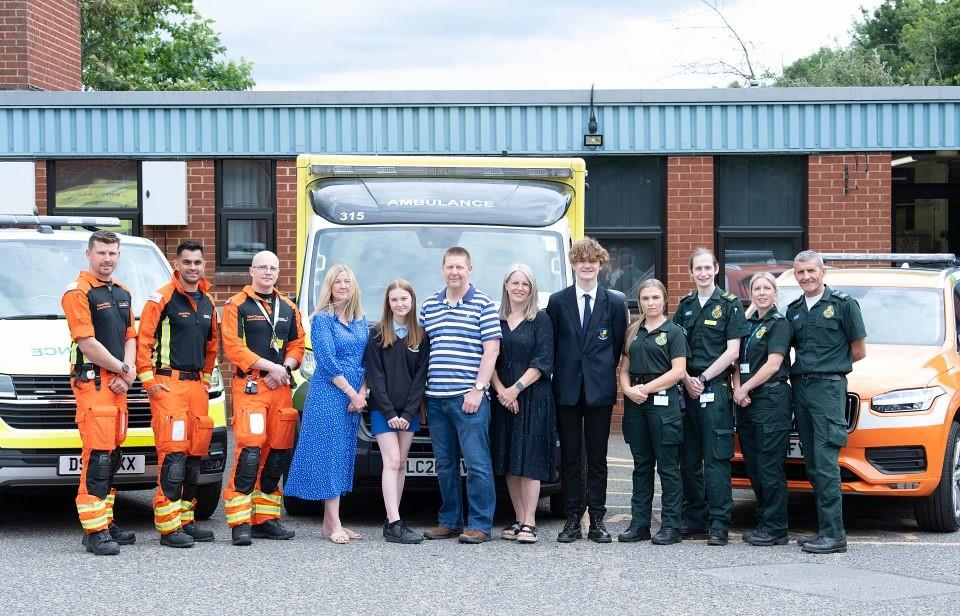 Crews from the East of England Ambulance Service NHS Trust (EEAST) and Magpas Air Ambulance have been shortlisted for a national award after bringing a 13-year-old in cardiac arrest back to life.

Daisy Webb was walking to school in Huntingdon during April when she suddenly fell to her knees, lost consciousness and stopped breathing.

The team performed a rapid general anaesthetic at the incident scene – a procedure usually only available in a hospital –  to protect Daisy’s vital functions before she was transferred by land to Addenbrooke’s Hospital for further care. She has since made a full recovery.

The EEAST team and colleagues from Magpas Air Ambulance have been named as finalists in 999 hero of The Sun’s ‘Who Cares Wins’ awards in recognition of their life-saving efforts, and will find out if they have won during November.

“We are incredibly proud of the fantastic teamwork showed by our crews and Magpas Air Ambulance partners during what was an incredibly challenging call,” said Lesley Hall, Leading Operations Manager with EEAST, was also on scene during the incident. “Attending a cardiac arrest is never easy, but when the patient is so young it makes it even harder.

“This was not a normal job by any stretch of the imagination. Thankfully this was a very rare event, and because of how the crews reacted under enormous pressure, Daisy now has her whole life ahead of her.”

Dr James Price, of Magpas Air Ambulance said: “Survival from cardiac arrest is very rare, especially in children. But everything went in Daisy's favour that day. From the bystander calling 999 to the CPR given early and the early shock to her heart from the ambulance crew.

“To see Daisy and her family now is incredible. It is very rewarding and makes the years of training in Pre-Hospital Emergency Medicine seem all the more worthwhile."

Daisy, together with parents John and Lisa, have since visited Huntingdon Ambulance Station to meet the team and thank them in person.

John, who is a retired police officer who now works in patient transport for the NHS said: “We would like to thank everybody who helped Daisy. They were all a credit to the NHS.”

Lisa, who is an assistant client accountant, added: “Words cannot express how grateful I am to everyone who helped Daisy that day. Everyone was in the right place.”

Daisy added: “Words can't really describe how I feel – just gratitude and thanks to everybody who gave me the chance to live.”

The awards ceremony will be broadcast on Channel 4 from 6.30pm on Sunday 27th November.

Picture caption: Daisy Webb, fifth from the left in between her mum, Lisa, and dad, John, meets the team who saved her life in April – Photo credit The Sun Newspaper