You are in:
Home/ In the news/ Family’s praise for “superwoman” Rebecca 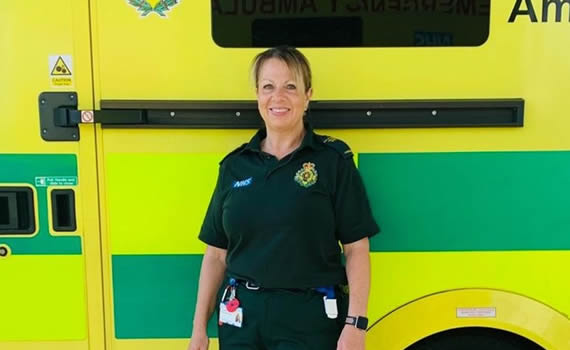 A grateful family have issued a heartfelt message of thanks to an East of England Ambulance Service (EEAST) paramedic who they credit with saving their mum’s life after she suffered a cardiac arrest.

Carole O’Halloran was waiting to be transferred from an ambulance into the ED at the Norfolk and Norwich Hospital during December when she slumped forward and stopped breathing.

Paramedic Rebecca Dunk, who was sitting with Carole, her partner George Chasemore and daughter Laura, immediately sprung into action and began CPR before using a defibrillator to help re-establish a regular heartbeat.

The family have now publicly thanked Rebecca for her efforts, praising her professionalism and calmness and describing her as “an exceptional person” whom they cannot thank enough.

“There will never be enough words to thank Rebecca for what she did for our mum,” said Laura, speaking on behalf of herself and her brother Michael. “She wouldn’t be here today if it wasn’t for Rebecca. She saved our mum’s life and our whole world right in front of me and I’ll be thankful of this for the rest of my life.

“Rebecca is an exceptional person and we are extremely lucky to have her amongst our emergency services team. The doctors at the hospital described her as superwomen, and we couldn’t agree more.”

Carole, 62, spent six days in hospital after the incident, during which time she was fitted with a pacemaker. She has since made a good recovery and was able to return to her Potter Heigham home in time to enjoy what she described as “a brilliant Christmas” with her family.

“People like Rebecca are few and far between in any organisation,” said George. “She was so professional and caring and went over and above her job, even coming to find us in the hospital a few hours later to check how we were all doing.

“She was absolutely brilliant and we are all extremely grateful for everything she has done for our family.”

Rebecca, who was alone in the ambulance at the time of the incident, said: “Carole’s cardiac arrest was very unexpected as we’d been laughing and joking just minutes earlier.

“Luckily we were able to get Carole back and its fantastic to hear she’s now doing so well. We don’t often get thank you letters so it was really lovely to hear from her family afterwards as it showed just how much they appreciated the care they received.

“I’d also like to thank my colleagues Mike Sibley and Andy Hayton who came to help during the incident.”