You are in:
Home/ In the news/ Essex paramedic completes Ironman challenge for charity close to his heart 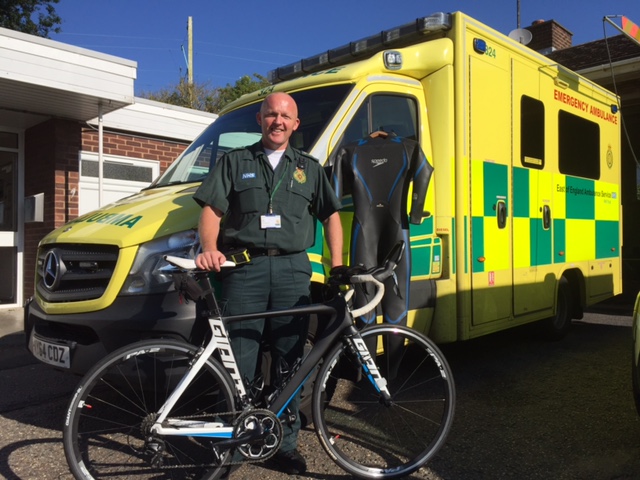 A paramedic has run, swam, and cycled more than 140 miles in a gruelling Ironman challenge all in the name of charity.

Marc Dixon made the trip up to Bolton to take part in the extraordinary triathlon which was made up of a 2.4 mile swim, 112 mile bike ride, and a 26.2 mile run.

Marc, who is based in Clacton and works for the East of England Ambulance Service NHS Trust (EEAST) is no stranger to physical challenged as has already completed the three peaks challenge, three marathons in three days, and a coast to coast bike ride and admitted that the event on the 17th July was no easier.

He said: “I’m still recovering with some aching muscle and joints, but the event went well considering I’d never completed a triathlon before. Mentally, it was a draining day but one which I know is helping a great charity.”

Marc was pleased to complete the challenge in 15 hours and five minutes, almost two hours under his target of 17 hours. He said: “The streets were lined with vocal spectators who helped motivate our tired legs; I was relieved to finish the event in that time.”

So far Marc has raised more than £580 for The Brain Tumour Charity one that he “believes is a worthy cause”.

The Brain Tumour Charity is one which is at the forefront of the fight to defeat brain tumours, funding pioneering research and providing support for those affected.

Marc’s justgiving page is currently at £586 and if you are interested in supporting his page can be found here: www.justgiving.com/Marc-Dixon1