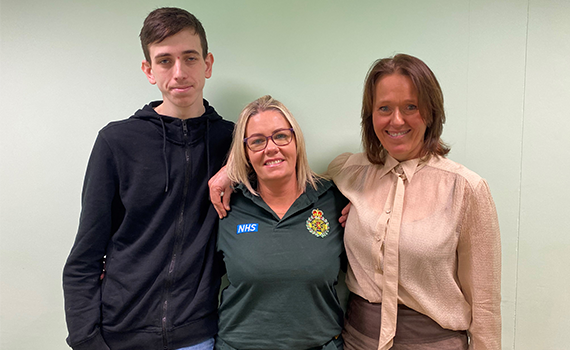 The incident in June 2022 happened without warning when Alice Peatling of St Lawrence Bay, put her head around the door of her 19-year old son’s bedroom.

She found, Jack, who had no previous history of illness, unresponsive and making an odd noise when he breathed. She called 999:

After describing the situation, the East of England Ambulance Service NHS Trust (EEAST) call handler Leigh Johnson told Alice that help was on its way, and she needed to get Jack on the floor.

“She asked me if I knew how to do CPR.  I didn’t, but she talked me through it, how to make the chest compressions and how quickly to do them.

“She stayed with me the whole time, and at one point there was yellow stuff coming out of Jack’s nose and I said ‘My son’s dead’, but Leigh wouldn’t let me get caught up in what I was feeling, she said, ‘don’t  think about that, stay with him’ “.

Air ambulance crew and paramedics arrived shortly and put Jack on a LUCAS chest compression machine and a defibrillator which eventually started his heart again.

“As the paramedics prepared to take Jack to hospital, they said that if I had not carried out CPR until they came, Jack would have been taken to the morgue instead,” said Alice.

However, the ordeal was far from over, as Alice was warned that her son’s heart had stopped for an estimated 48 minutes. She was told to prepare herself for the possibility that Jack might not live, or could have severe brain damage.

Jack was put into an induced coma and was in Intensive Care for nine days.

Remarkably, Jack made a full recovery, and after being transferred to another hospital for recuperation, he was discharged just 12 days later.

Just two weeks after being discharged, Jack was able to return to his job as a care worker specialising in people on the autistic spectrum.

The cause for his heart attack remains unknown, and Jack is in discussions with a specialist around having a defibrillator implanted against the possibility of a recurrence.

Alice and Jack were able to meet the call handler who helped them, when they were invited to Chelmsford Ambulance Operations Centre.

“It was lovely to speak to Leigh, and very cathartic for me, as I was able to say things I hadn’t actually voiced to anyone since then,” said Alice.

“I was also able to find out that after dealing with our call, Leigh was also supported and was able to get a break before going onto the next call, which I had worried about.

“What has happened between the three of us has created a connection.”

Leigh said: “It was such a pleasure to meet with Jack and Alice and to know I helped Alice to save Jack's life and with no long-lasting effects. With my CPR instructions to Alice she was able to keep the blood circulating around Jack's body until the ambulance crew arrived at the scene to take over.

“Call handlers are such an important part of the service as we are the first point of contact and can issue life-saving instructions over the phone until a paramedic arrives. And on this occasion it saved Jack's life.

“We have fantastic supportive team here at EEAST from our Call Handler Team Leaders and Duty Managers who offer immediate support after a traumatic call to our Wellbeing Team who are highly trained to support out frontline staff thereafter.”