You are in:
Home/ In the news/ Essex motorcyclist reunited with lifesavers following serious collision 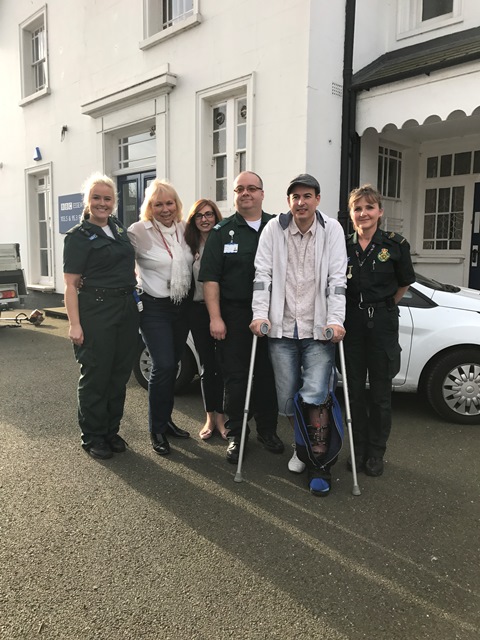 “If it wasn’t for them I would’ve died”: the words of a man eternally grateful for the efforts of an off duty medic and her colleagues who saved not only his leg but his life following a serious collision.

John Michaels, from Great Dunmow, was riding his motorbike on 25th August when he was struck by a car in Hatfield Heath, suffering a broken tibia, fibula, and femur in the process.

In what can only be described as sheer coincidence and luck, one of our off duty student paramedics, Kaitee Robinson, was behind in another car.

She said: “I noticed lots of traffic and thought someone had broken down, however when I got closer I could see John on the floor and his motorbike halfway down the road. Immediately I thought to myself: this isn’t good.”

John said: “If I had been one of the first people to arrive to that scene I don’t know if I’d have been able to do what she did.”

Kaitee utilised her training to ensure John didn’t deteriorate whilst waiting for support from her on duty colleagues, which arrived in the form of Emergency Medical Technician Neil Humber, Senior Paramedic Anne Worley, Student Paramedic Mary-Anne Murray, and a crew from the Essex and Herts Air Ambulance Trust (EHAAT). They worked hard together to immobilise him, using critical care to stabilise as best they could.

John was airlifted to Addenbrooke's Hospital in Cambridge, where specialists worked round the clock to save his leg, and several weeks later, he was able to travel home.

And last week, Kaitee, Neil, and Anne were invited to BBC Essex studios in Chelmsford to discuss the incident, when they were treated to surprise guests themselves in the form of John and his wife, Carmen.

John said: “On behalf of my family, thank you for saving me, because of you I am here today. The series of events following the crash saved my life. From the initial efforts of Kaitee, to the rapid response of everyone else - if it wasn’t for them I would’ve died.”

Carmen added: “I want to hug and kiss all of you, thank you from the bottom of my heart, we are so very grateful for what you did.”

Kaitee said: “It was so good to see John looking so well; it means so much to us to be recognised for what we did.”

Neil added: “Everyone worked really well together to save John, and it is really nice to see him and be appreciated for our efforts.”

If stories like this interest you in working for the ambulance service, find out more here: http://www.eastamb.nhs.uk/join-the-team/working-for-us.htm