You are in:
Home/ In the news/ Essex man reunited with life-saving medical crew 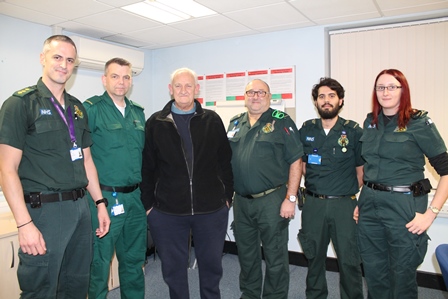 “I’m able to spend Christmas with my family when I would’ve been spending it in a coffin.” – those are the words of Ken Baldwin who has praised the medical staff who shocked his heart five times and saved his life just one month ago.

Ken, 67, was at home when he felt chest pains in the early hours on 20th November. His wife dialled 999 can Paramedic Shaun Oliphant arrived shortly after.

Shaun said: “Ken was alert and talking, but his condition deteriorated rapidly and he actually went into cardiac arrest in front of me.”

After five shocks with a defibrillator and use of an advanced chest compression machine called a Lucas, Ken was resuscitated and taken to Basildon and Thurrock Hospital where he made a full recovery.

Last Thursday, just three weeks after the event, Ken and his family were reunited with his life savers. He said: “You just can’t knock what these guys do. I feel like the luckiest man alive, it’s been lovely to meet them again, an extremely emotional day.”

Duty Locality Officer Dan said: “The teamwork from everyone involved was fantastic, giving Ken the best possible chance of survival.”

Ken’s daughter Nadine who also works for the Trust said: “It is an honour to wear this uniform, I’m simply amazed at the work that everyone did for my dad.”

For more information on our latest vacancies including student and graduate paramedics, and associate ambulance practitioners please visit http://www.eastamb.nhs.uk/join-the-team/working-for-us.htm