You are in:
Home/ In the news/ Essex couple reunited with life-saving ambulance crew 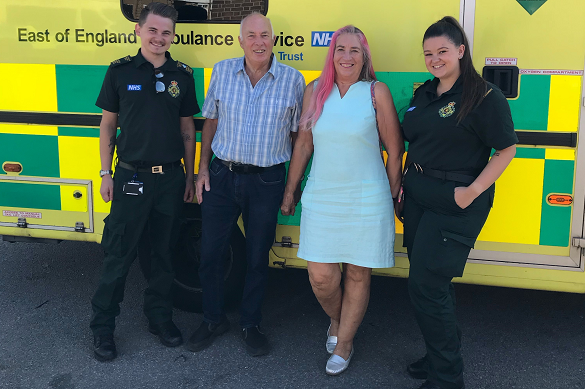 A man from Basildon has been reunited with the crew from East of England Ambulance Service NHS Trust (EEAST) who saved his life after he experienced a heart attack.

Back in May ambulance crew, Sian Carney, Paramedic and Mark Jones, Apprentice Emergency Medical Technician (EMT) were sent to help a man in his 70s who was experiencing chest pains.

Upon arrival they discovered Derek Jenkinson, who had been having chest pains and feeling faint for around two hours before calling 999.

Prior to this event, Derek had been fit and healthy with no previous heart problems or medication prescribed to him.

The crew assessed Derek, which included an electrocardiogram (ECG), a test that is used to check your heart's rhythm and electrical activity - this showed that Derek was having an inferior myocardial infarction (MI) and needed immediate transport to The Essex Cardiothoracic Centre at Basildon University Hospital.

Sian and Mark started treatment immediately, phoning ahead to the hospital to alert them to Derek’s condition and that they were on their way to the Cardiothoracic Centre.

As they got Derek settled onto the stretcher trolley and into the ambulance, he suddenly became unresponsive and had gone into a cardiac arrest.

The defibrillator pads were applied immediately, and they started chest compressions. After just one shock and two minutes of cardiopulmonary resuscitation (CPR), Derek was resuscitated and became alert and responsive again.

Derek was taken to Basildon University Hospital where he was successfully treated by their cardiothoracic team.

Sian and Mark visited Derek in hospital the following day, to find him sitting up in bed and talking with friends.

Sian said: “We were both very happy to see Derek recovering so well and to know that we were the difference between life and death for him was overwhelming.”

This month (October) Derek Jenkinson, and his wife Philippa Jenkinson-Dines, were invited to Basildon ambulance station to reunite with Sian and Mark, and to personally thank them for their life-saving actions.