You are in:
Home/ In the news/ English Channel swim raises thousands for charity 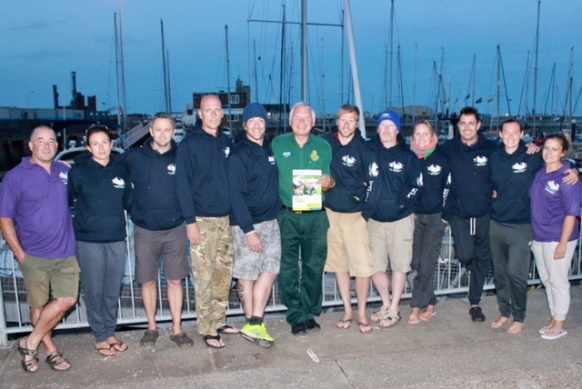 Ambulance staff from Suffolk have succeeded in raising thousands of pounds for charity after embarking on an intrepid challenge to swim the English Channel.

Their efforts have so far succeeded in raising around £4,000 to be shared between TASC, The Ambulance Staff Charity, and the Ambulance Wish Foundation UK.

After a frustrating week waiting for calm seas, the two teams, who are based at Ipswich and Bury St Edmonds respectively, finally managed to set off in far from ideal conditions from Samphire Hoe, near Dover, late on the night of Friday 7th July.

Each team, accompanied by a pilot boat, took it in turns to swim for one hour at a time across the 21 miles to the French coastline.

Unfortunately, Team East Suffolk, comprising team captain Carl Friar, Sam Nichols, Joe Foot, Mark Barham and Simon Pryke, were beaten by the difficult conditions in the early part of the crossing and were unable to complete the full distance.

A spokesman for the relay challenge said: “With the first five or six hours of the swim taking place in darkness, well done to them for battling through the waves, the tide, the cold, cramp, seasickness, and jellyfish.

Commiserations to Team East but equally well done for taking on one of the world’s most difficult sea swims. It is perhaps worth noting that more people climb Mt Everest than swim the English Channel!

The teams are thrilled to announce that so far they have raised in the region of £4,000 for our chosen ambulance charities. So, whether you have donated, or just supported us on our journey, both teams would like to say a massive thank you for enhancing our watery adventure.”

People are still able to donate to the relay challenge by visiting: http://uk.virginmoneygiving.com/team/paramedicchannelswim