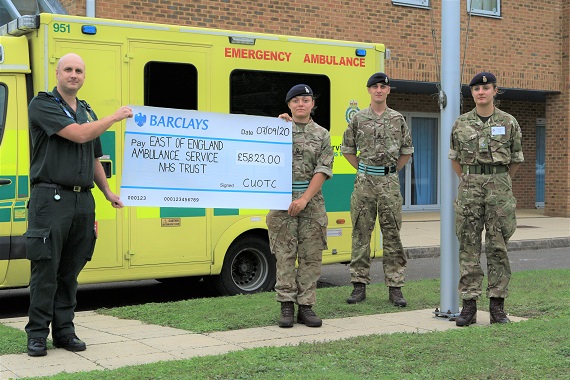 Committed cadets have raised nearly £6,000 for the East of England Ambulance Service (EEAST) after running, cycling and hiking the distance from Cambridge to Cape Town during lockdown.

The Cambridge University Officers’ Training Corps, which is the army reserve unit for university students across East Anglia, originally set themselves the challenge of covering the 8,325-mile distance in 36 days.

But when the dedicated group reached their target mileage on day 27, they decided to push themselves to see just how far they could go. They finished the challenge having clocked up an impressive 9,399 miles while raising £5,823 to thank EEAST for the vital role which staff have played during the coronavirus pandemic.

The money will be used for a variety of staff wellbeing initiatives, which could include team building exercises or creating special wellbeing gardens at stations were crews can relax between calls.

Luke Squibb, EEAST’s head of operations for Cambridgeshire and Peterborough, said: “We were incredibly impressed when we heard about the Cambridge to Cape Town Challenge and extremely grateful that the cadets chose to raise money for EEAST.

“The money will make a huge difference to our hard-working staff and will be spent on a range of different initiatives to help wellbeing, such as creating welcoming gardens at our stations where they can take time out during a busy shift.”

Luke and James Norman, EEAST’s general manager for South Cambridgeshire, were presented with a cheque by the officer cadets during a socially-distanced ceremony held at the Coldham’s Lane Army Reserve Centre.

Lieutenant Colonel Alastair Field MBE, the unit’s commanding officer, said “I am delighted that our officer cadets and staff have raised a total of £5,823 and beaten the target distance that we set at the start of the challenge. We are truly grateful for the many donations received and are pleased to support the brilliant work of those who are working tirelessly to keep our community safe during these challenging times.”

Officer cadet Pippa Slater said “It’s a wonderful feeling to have achieved this, and although we’re quite a fit bunch it was gruelling at times. As a medical student, I’ve seen first-hand how important EEAST’s work is across our communities.”