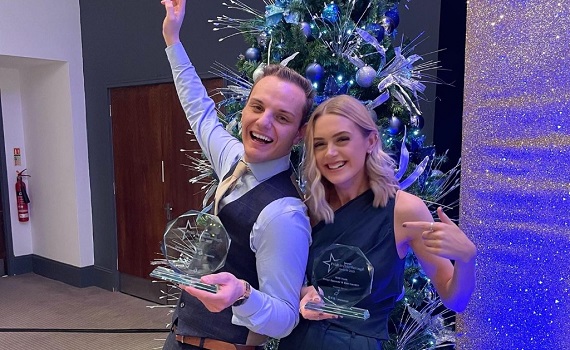 EEAST staff members Ben Hawkins and Chloe Spencer have scooped the NHS Hero Award at the Pride in Peterborough Awards.

Ben and Chloe received the award at a ceremony at the Holiday Inn in Thorpe Wood in recognition for their fundraising efforts for The Ambulance Staff Charity (TASC) on Tuesday 7th December.

The pair raised more than £3,500 to support colleagues’ mental health through a zipwire challenge in North Wales on August 31.

Both Ben and Chloe, who are an acting dispatch team leader and a pre-registration paramedic respectively, reached speeds of 118mph along the zipwire which started at 222 metres high.

Given both of them are scared of heights, it was quite a challenge for both to overcome but all for a cause that is close to Ben and Chloe’s hearts.

After receiving the award, Ben Hawkins said: “We’re so honoured to win the Pride in Peterborough NHS Hero Awards 2021 for the money we raised for TASC who support UK ambulance staff across the country.

“It’s been a journey for sure but we’re proud to be representing EEAST and thankful for the support.”

Chloe said: “After raising £3.5k with Ben to help ambulance staff in mental health need, I was delighted to win the NHS Hero Award and thank everyone for their support.”