You are in:
Home/ In the news/ EEAST pride goes national 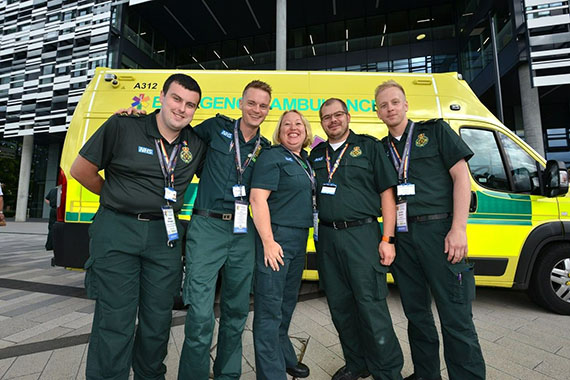 The conference saw approximately 200 people attend from ambulance services across the United Kingdom, providing attendees with a variety of interesting, and thought-provoking, talks and workshops.

Some of the important issues covered (amongst many others) were: culture; how to support transgender staff; mental health support; as well as a very moving talk on PTSD encompassing the speakers personal experience.

Shane Finnegan, EMT & Student Paramedic from Luton Station said: “Everyone I spoke to at the event really enjoyed the day and learned a lot” adding “if [anyone] would like any more information on the conference or any of the workshops or any other information about the network, there is a wealth of valuable information and resources on the website www.ambulancelgbt.org.”

The Pride Parade on the Saturday drew large crowds to the streets of Manchester and the weather reflected the carnival atmosphere, with blue skies and sunshine for the event. Staff from every ambulance service in the country marched (and danced... a lot) with great pride.

There were great cheers of joy from the crowds along the length of the parade route, with numerous people thanking the 120 or so ambulance staff in the parade, for everything we do and that they are immensely proud of both the ambulance service and the NHS.