You are in:
Home/ In the news/ EEAST Paramedics win TWO dream weddings totalling £120,000+ 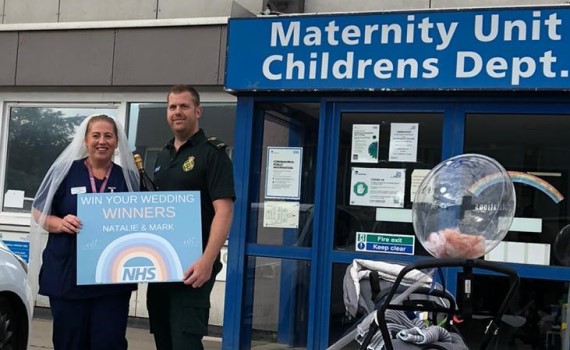 Paramedic Sarah Bevan, of Clare, Suffolk and her fiancée John Husband (a charge nurse at Addenbrooke’s Hospital) were entered into a competition in Hello! magazine by their son Charley (9) and her mother without her knowing.

Sarah said she hadn’t thought anything more about it until they were contacted and told that they had been shortlisted from 500 entries. They were interviewed through Zoom by a panel from the Magazine and advertisers who were supplying the prizes and a short while later they were told that they had won the prize.

When COVID-19 restrictions are finally lifted they will have a three-month window to book their wedding. In addition to being assigned a wedding planner,  Sarah and John have selected the Rosewood Hotel, London as the venue, and can now choose the catering, wedding dress, flowers, the cake and more from the range of designer wedding vendors that have sponsored the competition.

Sarah said that they had previously been thinking of having a small, local wedding, which would have meant that not everyone would have been able to come. Winning the prize has meant now meant that more of their family and friends will be able to join them for the big day.

“I’d wanted to get married, but had never thought of a wedding this big!” said Sarah.

Mark Bomford, a Senior Paramedic and his partner Natalie Chapman, a midwife at Basildon Hospital, who live in South Woodham Ferrers, Essex have also won a competition for a £26,000 wedding prize.

The competition – for couples where at least one partner worked in the NHS - was held on Facebook.

Mark said  Natalie had entered the competition but hadn’t thought about it until they had heard that they had won: “During the COVID-19 crisis there wasn’t much to do, so I went in for a few competitions,” said Natalie.

Their prize includes a dress for Natalie, a suit for Mark, the venue, wedding rings, catering, bridesmaid dresses, balloons and much more.

The couple, who have been together for four years and decided to get married at Christmas, have two potential dates in 2021 for their wedding.

“We had wanted to get married, but we were still deciding about what we wanted. Winning this prize has meant we can have much bigger day than we had planned.